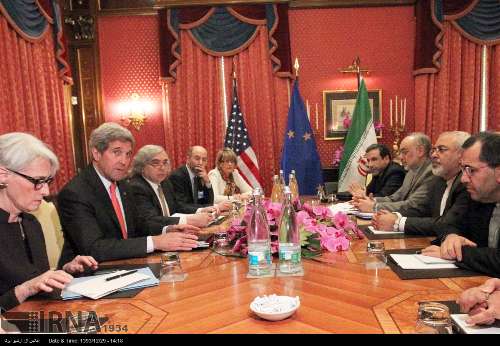 Marathon talks towards an Iran nuclear deal picked up pace Friday as US President Barack Obama appealed to Tehran to seize an “historic” opportunity and begin a “brighter future”.

In Switzerland, US Secretary of State John Kerry and his Iranian counterpart began their fifth day of talks, while in Brussels the leaders of Germany, France and Britain also met.

In a Nowruz (Persian New Year) video address, Obama said that a “reasonable nuclear deal… can help open the door to a brighter future for you the Iranian people.”

“I believe that our nations have an historic opportunity to resolve this issue peacefully — an opportunity we should not miss,” Obama said.

In an apparent response, Iranian Foreign Minister Mohammad Javad Zarif said it was the other side that had to make a decision.

“Iranians have already made their choice: engage with dignity. It’s high time for the US and its allies to chose: pressure or agreement,” Zarif wrote in a message posted on his official Twitter account.

Iran and six world powers — the US, China, Russia, Britain, France and Germany — are seeking to agree the outlines of a deal by March 31 after more than a year of negotiations.

The mooted agreement, due to be finalised by July, is aimed at convincing the world after a standoff now in its 13th year that Iran won’t build nuclear weapons under the guise of its civilian program.

In exchange Iran, which denies wanting nuclear weapons, would be granted staggered relief from the mountain of painful sanctions that have strangled its oil exports and hammered its economy.

Obama’s Republican opponents and Israel’s freshly re-elected Prime Minister Benjamin Netanyahu, whose country is assumed to have nukes itself, fear the deal will not do enough to stop Iran getting the bomb.

Negotiators missed two deadlines last July and November for a deal but the pressures in Washington — where Republicans are teeing up new sanctions legislation — all but rule out a new extension, experts say.

Both Kerry and Zarif on Thursday spoke of “progress” in the talks but both sides have said that there remain considerable gaps still to bridge.

“I think we are pretty far from a deal,” a European negotiator involved in the talks in Swiss city of Lausanne said on Thursday.

“The Iranians go back, go forward, it changes every day,” the diplomat said in Lausanne.

As a result it was unclear whether the current round of talks would wrap up as tentatively scheduled on Friday and resume next week, or continue indefinitely.

Together with the future size of Iran’s nuclear programme, a key sticking point is Iran’s demand to have UN security Council resolutions lifted “on day one” of the accord, the European said.

“They (the Iranians) say it is a deal breaker … But there is no way we will give way on this,” the diplomat said on condition of anonymity.

“We will lift them when the IAEA (the UN atomic agency) says to us at the security Council that the (Iran nuclear) programme is peaceful… I think this would take years,” he said.

But US and EU sanctions that have choked Iran’s oil exports and cut its banks off from the global financial system could be suspended within six months to a year from a deal, he said.

French government sources said the discussions, which lasted 40 minutes, “were a useful exchange of views.”