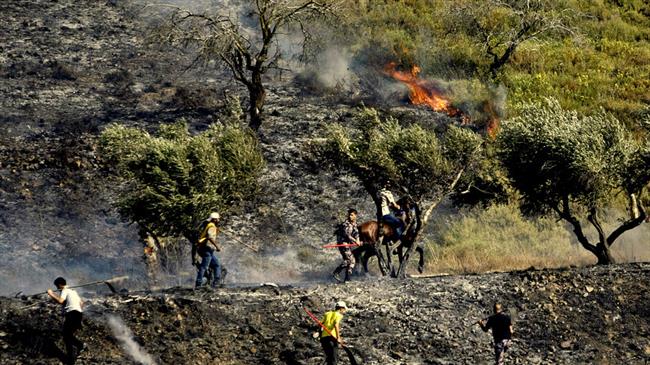 Palestinians try to put out fire set by Israeli settlers in an olive grove near the West Bank village of Burin on June 3, 2013.

Israeli forces have once again attacked Palestinian olive farms in the occupied West Bank and destroyed hundreds of saplings.

Ghassan Daghlas, a Palestinian Authority official, said dozens of Israeli military vehicles and bulldozers on Wednesday evening uprooted some 300 olive trees in the village of Majdal Bani Fadilan, south of the city of Nablus.

The olive saplings had been planted as part of an agricultural project in the area, he added.

The Israeli forces also razed more than 5,000 meters of stone walls in the area, Daghlas said.

Majdal Bani Fadil, located on the eastern edge of the Nablus region, is surrounded by areas under Israeli military control as well as Israeli settlements on all sides.

The olive industry provides a livelihood for about 80,000 Palestinian families in the West Bank. Israel has uprooted over 800,000 olive trees in the occupied territories since 1967.

Earlier in January, Israelis settlers attacked the Palestinian properties in occupied territories and chopped down dozens of olive trees in the southern West Bank.

Settlers, mostly armed, regularly attack Palestinian villages and farms and set fire to their mosques, olive groves and other properties in the West Bank under the so-called “price tag” policy.

The attacks are carried out with impunity. Palestinians say the violent attacks by Israeli settlers are systematic and are often ignored by Israeli officials.

The Al-Tadamun Foundation for Human Rights, a Palestinian NGO, said in an annual 2014 report that an estimated 8,000 trees, some of them hundreds of years old, were damaged and destroyed altogether by the Israelis last year.