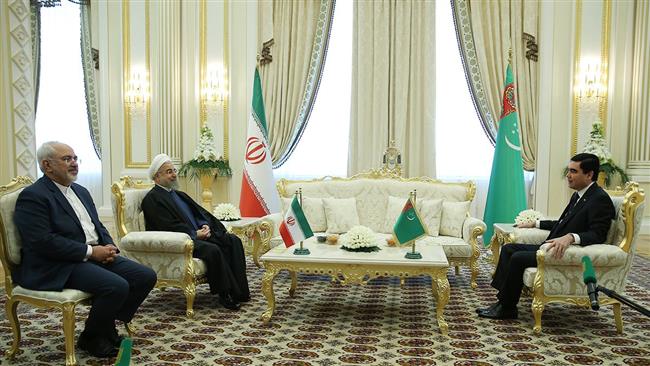 Does Iran have a ‘bridge’ to Central Asia?

President Hassan Rouhani’s recent trip to Turkmenistan cannot be dismissed as a one-off. Since coming to office in August 2013, the Rouhani administration has prioritized relations with the Muslim states of the former Soviet Union. Given the potential for economic ties and trade, Tehran’s aspirations are fully understandable.

Meanwhile, the Central Asian states are largely receptive. But for this latest momentum to gain enduring traction, Tehran has to be smart about its appeal to the Central Asians. For them, Iran is a very familiar civilization and a much-needed bridge to world markets. On the other hand, any attempt by Tehran to interject its Islamist ideology into relations will very likely give the famously cautious secular Central Asian governments reasons to once again pull away.

Rouhani’s March 10-11 visit to Turkmenistan, a famously insular country, picked up significant coverage in the Iranian media. As Iran’s Fars News pointed out, the Turkmen were also infatuated with the likely results to come from this rare state visit to Ashgabat.

While an expansion in economic ties is no doubt a real possibility, some of the pledges made during Rouhani’s visit amounted to diplomatic hype. Rouhani, for example, said that Iran and Turkmenistan have decided to increase trade from $3.7 billion to $60 billion per year in 10 years time. There was not much detail about how such a 16-fold increase can be achieved for two countries that each rely extensively on exporting oil and natural gas.

This article was written by Alex Vatanka for Al-Monitor on March 19, 2015. Alex Vatanka is a senior fellow at the Middle East Institute in Washington, D.C. Vatanka is the author of a forthcoming book on Iran and Pakistan: Security, Diplomacy and American Influence to be published by I.B. Tauris.