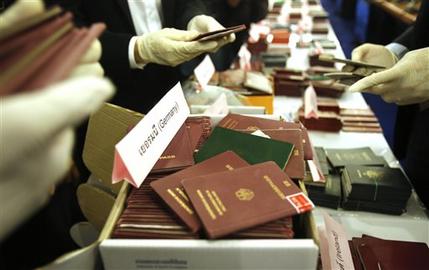 BANGKOK (AP) — Thai authorities said Wednesday they had arrested an Iranian they accused of leading one of the largest passport forgery networks in the country for more than a decade.

Murel Gurat, 45, was apprehended at a house in seaside Chonburi province after two years of investigation by DSI officials, Songsak said. He said Gurat’s network had been operating in Thailand for more than a decade and was connected to groups of Bangladeshi and Pakistani forgers who were arrested earlier by the Thai authorities.

“You never saw more than 1,000 passports from 65 countries that went missing show up here in one place. This is the evidence that showed that this network was well connected to other groups all over the world,” Songsak told reporters at a media conference.

Officials said the group sold, bought and forged the passports for those wanting to travel to a third country for different purposes, but the authorities’ major concerns were about terrorism and transnational crimes.

Gurat is facing multiple charges, including forging passports and false documents and receiving stolen property – the offenses that carry a maximum jail term of 10 years. Gurat had a fake passport himself under the name Esrafil Bondar, Thai authorities said.

Thai police said no attorney had come forward to represent Gurat yet.

Thailand was in the spotlight as a hub for false document crimes last year after two of the passengers on vanished Malaysia Airlines Flight 370 were found to have boarded the plane using false identities based on passports stolen from tourists in Thailand.