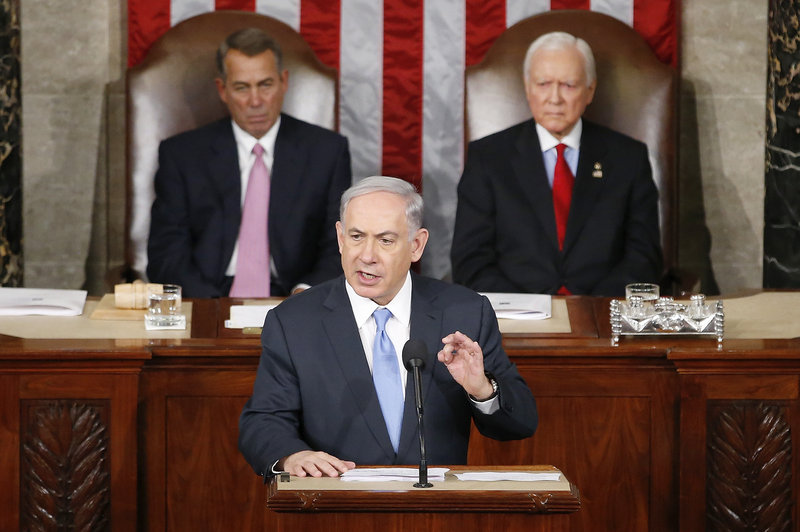 Seventeen points to know about Netanyahu

Tehran, March 17, IRNA – A former top Iranian nuclear negotiator says Israeli Prime Minister Benjamin Netanyahu’s histrionics in the US Congress on March 3 was an implicit effort to overturn US foreign policy and goad Washington into a disastrous war with Iran.

In an article Seyed Hossein Mousavian wrote for Gulf News and published Monday, he cites 17 points to understand about Netanyahu.

The full text of his article follows:

As the Israeli prime minister accuses Iran of building weapons of mass destruction, he ignores that Iran is a country that was attacked by chemical weapons during the Iran-Iraq War, though Tehran did not retaliate.

Israeli Prime Minister Benjamin Netanyahu’s histrionics in the US Congress on March 3 was an implicit effort to overturn US foreign policy and goad Washington into a disastrous war with Iran.

Riddled with misinformation and outright conspiracies about Iran’s nuclear program and Iranian foreign policy, his attempt at undermining the Obama administration has thus far only served to reveal to the world how little he cares for the best interests of the US in the Middle East. “I was near tears during Netanyahu’s speech to Congress — saddened by the insult to the intelligence of the United States as part of the P5 +1 nations,” House Minority Leader Nancy Pelosi said after the speech. Here are 17 points to understand about Netanyahu:

1. Netanyahu wishes for the US-Iranian relationship to remain in crisis in perpetuity. His campaign against nuclear deal with Iran is about blocking any chance may lead to peace between the US and Iran.

2. His predictions have been wrong for 25 years; he’s been crying wolf about the supposed imminence of an Iranian bomb as far back as the early 1990s.

3. Military action has always been Netanyahu’s preferred course of action against Iran and other Muslim countries in the region. “The prime minister came close to attacking Iran some four years ago despite the united opposition of the security services,” said Meir Dagan former spymaster of Israel who served two years under Netanyahu.

4. Netanyahu’s framing of the Iranian nuclear program is eerily similar to his statements at the US Congress in 2002 about Iraq. At that time, he used the same language of certainty he uses about Iran today. He pushed the US to attack Iraq and promised it will bring regime change in Iran. The result was a disastrous war, with the deaths of hundreds of thousands of innocent Iraqis and thousands of US troops, hundreds of billions of dollars wasted, planted the seed that eventually became Daesh and today, Iran is more powerful and influential.

5. He claims his worry is about the state of Israel and future of the Jewish people. “He doesn’t speak for me on this, I think it’s a rather arrogant statement,” responded Jewish Senator Dianne Feinstein. The group of 180 commanders and senior officials from all the defence agencies of Israel warned Netanyahu’s policy on Iran will damage Israel’s interest. Former Mossad chief Meir Dagan has also proclaimed that Netanyahu’s policies with respect to the Palestinians “will end the Zionist dream”.

6. He reiterated that nuclear deal with Iran would endanger Israel’s very existence. Tamir Pardo, the current chief of Mossad, has said that a nuclear Iran would not pose an existential threat to Israel even if it did acquire nuclear weapons. His predecessors Meir Dagan and Ephraim Halevy also have also criticized Netanyahu for claiming an “existential threat” is posed by Iran.

7. Netanyahu conveniently always ignores important facts about Iran’s nuclear program: Iran is a signatory to the Nuclear Non-proliferation Treaty (NPT) and Israel is not, Iran does not have a single nuclear weapon and Israel has hundreds, and Iran has undergone 7000 man/hour worth of inspection of its nuclear facilities and Israel has undergone zero.

8. His hawkish and ill-founded recommendations are against the will of American people. A new poll shows that a majority of Americans support an agreement that would limit Iran’s enrichment capacity and impose additional intrusive inspections in exchange for the lifting of some sanctions.

9. Netanyahu’s key demand to the US Congress was to broaden sanctions on Iran and bar it from any uranium enrichment whatsoever. This ignores the fact that before any sanctions were imposed against Iran for its nuclear program, Iran had offered a deal more attractive than anything on the table now. At the time, however, the Bush administration insisted on no enrichment in Iran, which contravenes Iran’s rights under the NPT. Iran then responded to pressure with pressure — and as sanctions increased, Iran’s enrichment program was expanded.

10. The current deal being negotiated would limit Iran’s uranium enrichment capacity to its practical domestic needs (capping it at 5 per cent for power generation purposes) and modify Iran’s heavy water reactor to prevent weapons-relevant levels of plutonium production. All of this will take place under an unprecedentedly intrusive international inspections regime. He never mentioned these facts.

11. His repeated assertion that Iran is actively seeking nuclear weapons ignores the fact the US, Europe, and even many Israeli officials generally agree on three things about Iran’s nuclear programme: Tehran does not have a bomb, it has not many a decision to build one, and is years away from having a deliverable nuclear warhead. It also contradicts the repeated findings of the IAEA that no materials have been diverted for military purposes inside Iran.

12. As Netanyahu accuses Iran of building weapons of mass destruction, he ignores that Iran is a country that was attacked by chemical weapons during the Iran-Iraq War after the US and other states gave Saddam Hussain chemical weapons material and technology. Despite the fact that more than 100,000 Iranian were killed or injured, Tehran did not reciprocate in kind due its religious values.

13. All the major countries of the world are co-negotiators with the US and are in favor of a nuclear deal with Iran. If Netanyahu’s intervention successfully leads to Congress killing any deal, there is no reason to believe the US would not become more isolated and that the international sanctions will hold for long.

14. Netanyahu said Iran must stop its aggression in the Middle East. This is as Iran has not invaded another country in last 250 years. Israel has initiated no less than six wars in 60 years.

15. Netanyahu also proposed broadening the scope of the negotiations to include hyped up claims made about Iran’s activities in the region and even Iranian domestic policies. It would be good for him to remember that the Bush administration refused Iran’s “grand bargain” proposal in 2003.

16. Netanyahu claimed any nuclear deal with Iran would trigger an uncontrollable arms race in the Middle East and bury the dream of a Nuclear-Weapons-Free Zone (NWFZ) in the region. The reality is that Iran has proposed a NWFZ in the Middle East since 1970 and Israel is the only country preventing this from coming to be. Moreover, many arms control experts have argued that there has been no evident correlation between Iran’s expansion of its nuclear program in the last decade and increased enrichment capacity across the region. A nuclear deal with Iran actually enhances the NPT and the prospects for NWFZ in the Middle East given how much it would constrain Iran’s nuclear program.

The New York Times said of Netanyahu on March 5: “Netanyahu has always been an abrasive and unhelpful figure. In the George H.W. Bush presidency, James Baker was so fed up with Bibi that he banned him from the State Department building.” After Netanyahu’s address to Congress, President Barack Obama also stated that “there was nothing new” presented and that the Israeli PM “didn’t offer any viable alternative” to a peaceful diplomatic settlement with Iran.

The truth is there are many benefits to a US-Iran rapprochement. As US Secretary of State John Kerry has said, Iran and the US have ‘mutual interest’ in fighting Daesh a group that is clearly the biggest threat to international peace and security today. Iran is in fact now a leading force in helping Iraq defend its territorial integrity against the onslaught by the self-proclaimed “Islamic State” terrorist group. A nuclear deal will help the US and the world powers start exploring other possibilities for cooperation with Iran such as in preventing Iraq and Syria from completely falling apart, and even in efforts to stabilize Afghanistan. And these would only be for starters. The US and the world powers should not let Netanyahu to kill this chance.

Ambassador Seyed Hossein Mousavian is a research scholar at Princeton University and a former spokesman for Iran’s nuclear negotiators. His latest book, Iran and the United States: An Insider’s view on the Failed Past and the Road to Peace was released in May 2014.