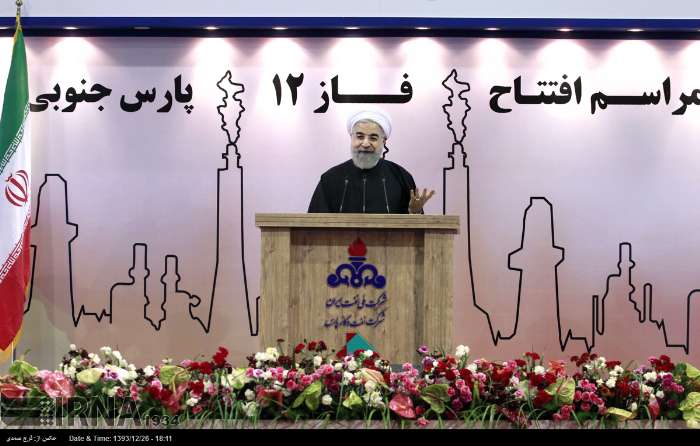 The Iranian president Hassan Rouhani said Government of Hope and Prudence works for prosperity of the nation thanks to resolve, faith and sacrifice of the great nation.

The Iranian president Hassan Rouhani said on Tuesday Government of Hope and Prudence works for prosperity of the nation thanks to resolve, faith and sacrifice of the great nation.

He made the remarks in a ceremony to inaugurate the gas development project at Assalouyeh in southern Iran.

‘I’m happy that at the same time that the negotiating team are in talks in Switzerland and simultaneous with the Day of Nationalization of Oil Industry, the country’s biggest gas project is coming on stream.

Referring to the government’s measures to fulfill its promises, Rouhani said that the inflation has been brought down to lower than 16% and that based on the latest statistics, the country’s economic growth over the past 9 months shows three percent increase compared to the preceding period last year.

He noted that all of these have been achieved amid the toughest sanctions on the country, with reliance on Almighty God and the national resolve.

Rouhani said that Iran has firmly stood up to the excessive demands of the western governments – known as the P5+1 – expressing hope that the negotiations will yield fruit to put an end to the arbitrary sanctions.