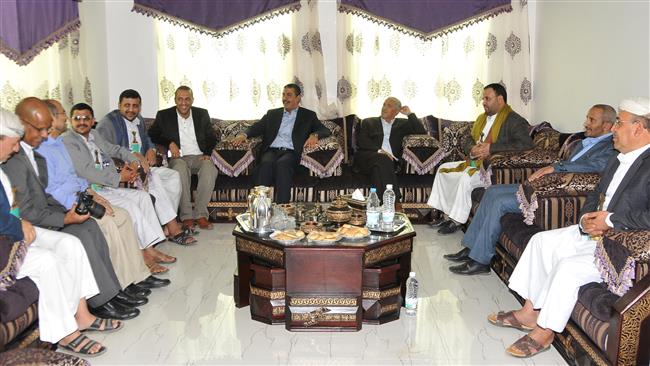 Former Yemeni Prime Minister Khalid Bahah (C-L) sits with ex-Foreign Minister Abdullah Al-Saidi (C-R) and aides at his house in Sana’a on March 16, 2015 after the Ansarullah movement agreed to free him and all his cabinet ministers after nearly two months of house arrest.

The Houthi Ansarullah movement in Yemen has lifted a house arrest on former Premier Khaled Bahah and his cabinet ministers, allowing them to leave the capital city of Sana’a.

A source close to Bahah said that he plans to travel to New York from Saudi Arabia to join his family there.

Yemeni fugitive former President Abd Rabbuh Mansour Hadi, along with the cabinet of Bahah, stepped down in late January, but the Yemeni parliament did not approve the president’s resignation. This came after the Houthi fighters took control of Sana’a last September, 2014.

In a post on his Facebook page, Bahah (pictured below) described the move by Ansarullah to end the house arrest as “a goodwill gesture.”

“This comes as an expression of sincere good intentions… [the government] confirms it does not desire to return to its duties in light of the exceptional circumstances,” he wrote.

Bahah added that the move will open “the way for political factions to carry out their national responsibility to come up with an agreement which works to restore a transition.”

Hadi fled his home in Sana’a on February 21 after weeks under effective house arrest and went to Aden, Yemen’s second largest city, where he officially withdrew his resignation and highlighted his intention to resume duties.

Later, an aide to Hadi also quoted him as saying that he considers Aden to be Yemen’s capital.

Some Persian Gulf Arab states, including Saudi Arabia, have already relocated their embassies from Sana’a to Aden.

Hadi also called on the Ansarullah revolutionaries to relinquish power and leave Sana’a. The Houthis, however, said Hadi had lost his legitimacy as head of state and was being sought as a fugitive from justice.

The Houthi movement played a key role in the 2011 popular uprising that forced dictator Ali Abdullah Saleh to quit after 33 years in power. The Ansarullah revolutionaries say the Yemeni government has been incapable of properly running the affairs of the country and providing security.