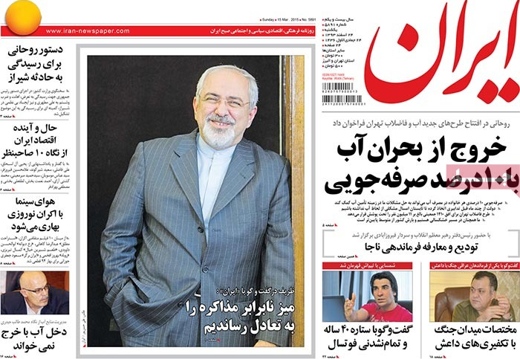 In an in-depth interview, Iranian Foreign Minister Mohammad Javad Zarif talks about nuclear negotiations and how he is holding up.

Foreign Minister Mohammad Javad Zarif has said although some of the things opponents of nuclear talks at home say do play into the hands of the other side, his primary concern is to prevent Iran’s national interests from being jeopardized.

On March 15, Iran published an in-depth interview with the top diplomat conducted earlier in the month by the daily’s Maryam Salari. The following is a partial translation of what the Iranian foreign policy chief said in the interview:

On how he and his performance will be judged

I knew about the difficulties associated with the job [leading the country’s nuclear negotiating team] before I accepted to take the helm. I knew that the talks were likely to face difficulty both at home and on the international stage. One reason why I knew about the stumbling blocks lying ahead was my previous position.

Before being named foreign minister, when the nuclear case was at a critical point – when it was taken to the UN Security Council and more sanctions were slapped on Iran – I was set aside for certain reasons. Actually, I was forced to retire.

For almost six years, I was looking at things from the vantage point of being away from the decision-making quarters. I knew well that the going was tough.

After the massive turnout for presidential elections in which Iranians voted for adoption of an approach based on interaction, logic and wisdom, I felt duty-bound to accept the foreign minister’s portfolio.

Although I was not interested in leading the Iranian negotiating team, I was entrusted with the job. That was quite a responsibility, and I felt I had to fulfill it to the best of my ability.

I have since focused my attention on trying my best to fulfill the duty of my office. I may have committed some mistakes along the way, but that is nothing unnatural.

I have gone out of my way to act in line with the decisions of the senior officials of the establishment. With such an attitude to my mission, I am not worried how future or present generations will judge me.

Both sides to the talks over Iran’s nuclear program – which is a grand bargain in the contemporary international relations – have accumulated assets. Naturally, they don’t want to let go of their capital.

On one side of this bargain are the Iranian people who have put up resistance for years in the face of Western pressures. Not only have they not retreated, but have improved their scientific capabilities. They have proven that pressures won’t work in helping foreigners secure domination over them.

Over the years, the other side has turned sanctions into leverage to put pressure on the Iranian people. The Americans have used different occasions including the embassy takeover, Security Council Resolution 598 and the nuclear issue to get the Security Council to impose sanctions on Iran.

In other words, American moves to prompt the international community to put pressure on Iran date back to thirty-something years ago. With the nuclear dispute heating up, the US secured its goal after three decades of efforts. Naturally, they view the sanctions-related pressures as an asset.

However, their supposition that they will be able to pressure Iran through sanctions has not materialized. A case in point, in the early years of the nuclear dispute Iran had 200 centrifuges. After the imposition of sanctions the number has risen to 20,000.

If history is any indication, Iranians become more perseverant when they are exposed to more pressures. Five permanent members of the UN Security Council plus Germany – which has always sought to become a permanent member of the council itself – sit across the table from Iran in the talks.

What is interesting is that never in the history of the council have P5 been unanimous on a single issue. The only exception came when they put pressure on Iran to agree to an end to the imposed war and when Iran’s nuclear case came up for discussion.

The fact that these countries along with Germany have been acting in a concerted way against Iran for seven years has complicated the talks. Of course, they have come to the conclusion that the only way to solve Iran’s nuclear case goes through negotiations.

On why the West decided to stop imposing further sanctions

The ultimate goal of the sanctions was to drive a wedge between people and the government. They hoped with the creation of division, people would put pressure on the government to back down on its nuclear stance. But the elections proved that there existed no such a gap. […]

In other words, following Iran’s presidential elections, the West concluded that Iranian people supported the nuclear stance of their government. So the West came to the conclusion that its hopes of Iran’s nuclear surrender or regime change through more and more pressure on the public are irrational. […]

That was how the idea of holding talks with Iran gathered momentum in the West. At the talks, we tried to use rationality and the principle of talks not just for the sake of talks to drive that point home. That understanding now exists in the West; whether it will be reflected in the actions the West takes is difficult to predict.

I don’t blame those who have serious doubts about American intentions. […] I share their stance on the necessity of holding on to Iran’s dignity and remaining committed to principles.

What divides us though is the approach to dealing with the United States. I believe the logical responsibility of the Iranian diplomatic apparatus is to deny American hardliners ammunition. That objective can be served through talks. Exposing the nature of unfounded allegations they level against us can drive them to the sidelines in the decision-making process in their own country.

Even if we assume that opposition to Iran is a bipartisan goal in the US, we should not forget the fact that the US does not necessarily secure its goals on the international stage. Did the US secure its goal in the Vietnam War? Was the deal it signed to end the war one which was ideal to Washington? Did the US withdraw its troops from Iraq and Afghanistan voluntarily? Why do we assume that the US is a superpower which gets whatever it wants?

I don’t buy the notion that no deal is signed unless it serves the interests of the US. I suggest these people review history to see how many agreements have exactly met each and every single demand of one signatory.

On America’s failure on the political front

Cases of American failure are not limited to battlefields. There are several cases on the political front, too. For instance, in 1995, when the US was under the illusion that it was the only superpower in a unipolar world, Bush 41, raised the question of a New World Order at the UN General Assembly.

At the same time a number of countries launched a motion to establish an international criminal court. Although the US was bitterly opposed to the move, the court was eventually established. In other words, the US failed on a front which was of vital importance to it.

So one can say that the idea that the US is invincible is not correct. The most important thing neocons want to instill in the world is that all wars and negotiations end the way the US wants them to. But realities on the ground around the world do not confirm their idea.

I don’t buy the notion that it is impossible to pull off a political victory over the US. In keeping with its principle of independence, the Islamic Republic of Iran has secured remarkable victories on the international stage. […]

In the past, anytime Netanyahu visited the US, he would return to Tel Aviv with new American sanctions against Iran. Over the past two years, thanks to the changes in the atmosphere of the talks, he has been unable to convince American leaders to slap any new sanctions on us.

Things have changed. Obama recently told Congress that additional sanctions legislation would isolate the United States from its international coalition. Such comments show that Tehran’s new policy which is based on the unwavering support of the Iranian nation has restored balance to the skewed negotiating table. I hope the balance in question will help us secure success down the line.

On the stance and comments of local hardliners opposed to talks

It is my hope that individuals or parties never stick to their factional and partisan interests at the expense of the country’s national interests or foreign policy.

The comments some local critics made in connection with the Geneva deal played into the hands of the other party. […] Critics need to be fair and think about the likely consequences of their comments.

I launched my carrier at a very young age. After the revolution I got a job at the Iranian consulate in San Francisco at the age of 19. I landed the job because I knew English and I was a political science major.

Thanks to my busy schedule I have little time left for socializing. I got married at a young age, and that left me almost no time to spend time with friends or at social gatherings. That does not mean that I keep to myself. I have to divide my time between work and home.

This article was translated by IFP from Iran newspaper.