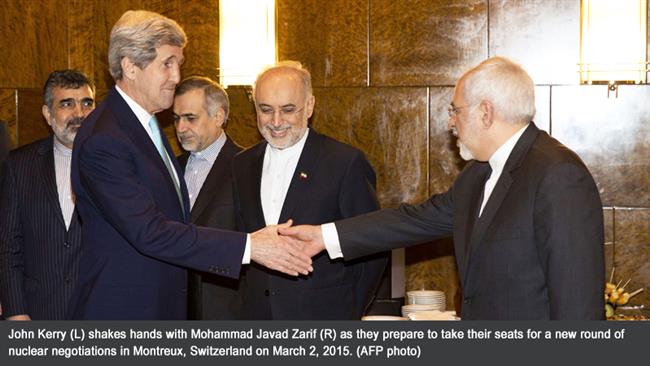 US Secretary of State John Kerry has denounced a Republican letter to Iran as an “unprecedented” and “calculated” attempt to interfere with nuclear talks underway between Tehran and the P5+1 group, saying he will not apologize for the letter when negotiations resume on Monday morning.

A group of 47 Republican senators ignored protocol and sent an open letter to Iran’s leaders on Monday, warning that whatever agreement reached with President Barack Obama would be a “mere executive agreement” and that Congress could ultimately walk away from any deal with Tehran upon review.

Kerry said on CBS’s “Face the Nation” program on Sunday that the GOP letter was “absolutely calculated directly to interfere with these negotiations.”

“It specifically inserts itself directly to the leader of another country saying, ‘Don’t negotiate with these guys because we’re going to change this,’ which by the way, is not only contrary to the Constitution with respect to the executive’s right to negotiate, but it is incorrect because they cannot change an executive agreement,” the top US diplomat said.

“So it’s false information and directly calculated to interfere and basically say, ‘Don’t negotiate with them. You’ve got to negotiate with 535 members of Congress,’” he added.

“I do know that the effect and the intent of the author was to basically say, ‘Don’t do this deal,’” Kerry said, referring to freshman Republican Senator Tom Cotton, who claims that he has drafted the letter.

However, independent analysts say the GOP letter was actually written by Bill Kristol, the founder of the Emergency Committee for Israel, which is an American neoconservative group associated with the Israel lobby.  The group reportedly provided one million dollars to Cotton just before the last election.

The letter appeared at a time when nuclear talks between Iran and the P5+1 countries – the US, Britain, France, China, Russia, and Germany – have entered a sensitive final stage ahead of the July 1 deadline for a comprehensive agreement.

A new round of talks between Kerry and Iranian Foreign Minister Mohammad Javad Zarif is expected to take place in Lausanne, Switzerland on March 16.

Kerry told CBS News that he won’t apologize for the letter when nuclear negotiations resume on Monday morning.

“Not on your life. I’m not going to apologize for [an] unconstitutional, un-thought-out action by somebody who’s been in the United States Senate for 60 something days,” he said, referring to Cotton. “That’s just inappropriate.”

“I will explain very clearly that Congress does not have the right to change an executive agreement,” he said. “Another president may have a different view about it.”

The Republican lawmakers who signed the letter are under fire both from the Obama administration as well as the American people, with many demanding treason charges be filed against them for their alleged violation of the US Constitution.

A petition to the White House demanding treason charges against the signatories of the letter has collected nearly 300,000 signatures since Monday.

Even some Republicans, including those who signed the letter, are now wondering if it was a good strategy, according to a report by the Daily Beast.