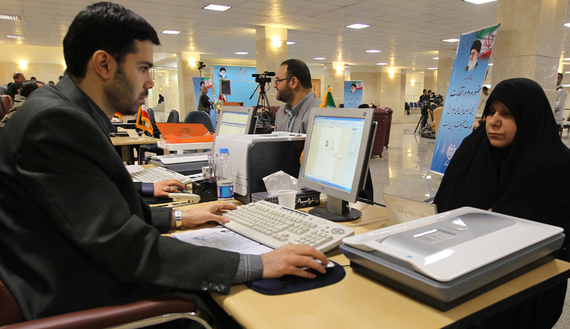 An Iranian woman registers her candidacy for parliamentary elections at the Interior Ministry in Tehran, Dec. 24, 2011. (photo by ATTA KENARE/AFP/Getty Images)

Nine out of 290 members of the Iranian parliament are women. This 3% membership puts Iran near the bottom of the international measures of female parliamentary representation. Women have never been more than 5% of the parliament, but they have always been among the key political players on both sides of the political divide in the Islamic Republic.

Eight of the nine women in parliament belong to the “Principlist” (conservative) side of the house. Three (Fatemeh Alia, Mahnaz Bahmani and Zohre Tabibzadeh) sit on the Central Council of the Principlist Caucus, which is the more hard-line of the two main conservative factions in the parliament. Another member, Fatemeh Rahbar, is on the leadership body of the Islamic Coalition Party, the oldest Islamist party in the country. Parliament members Laleh Eftekhari and Nayereh Akhavan are two other political heavyweights in their own right. This makes the all-female Women and Family Caucus an unlikely power center in the country.

One of the Islamic Republic’s many contradictions is that it has always boasted both leading female members and laws that limit female participation.

“Unity of the people was among the slogans of the Islamic Revolution and this includes women,” Effat Shariati, a conservative member of parliament from 1996 to 2004, told Al-Monitor. She quotes Ayatollah Ruhollah Khomeini, the founder of the Islamic Republic, who said “women are developers of humans, just like the Quran.”