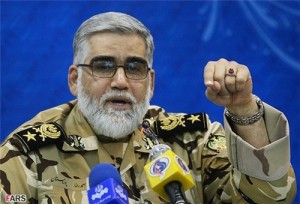 “Today the enemies of the Islamic Republic of Iran have come to realize that our country enjoys extraordinary military capabilities, and this power has deterred the enemies,” he stressed.

In relevant remarks on Saturday night, Pourdastan blasted the arrogant powers’ support for the terrorist groups in the region, and said the ISIL and other Takfiri groups were fighting in a US proxy war against the Muslim world.

Addressing a ceremony in the Western province of Kurdistan, he said that the Islamic Republic had faced different plots during its 36-year-old life.

Noting that the enemy had waged a war against Iran in the past by accusing the country of violating the human rights and democracy, he said, “Today, the enemy has taken its mask off (its face) and we are facing new threats and should, thus, create the necessary capacities to defuse these threats.”

Pourdastan warned of the US and its allies’ plots to prevent the empowerment of the Muslim world, and said, “Today, there is strong unity between the Shiite and Sunni brothers, but the world arrogance is deeply fearful of this unity.”

Warning that the world arrogance had changed its strategy against Muslims, he said, “The US has created Takfiri, ISIL, Taliban and Boko Haram groups to fight for it in a proxy war against Islam.”

“The ISIL has kept a wide distance from the Iranian borders as the Iraqi army is forcefully pushing back the ISIL from regions under their control,” Brigadier General Rezayee told reporters in the city of Zahedan, Southeastern Iran.

He underlined that full security has been preserved along the country’s borders in the West, while border entanglements and control have grown tighter than before in Eastern and Southeastern Iran.