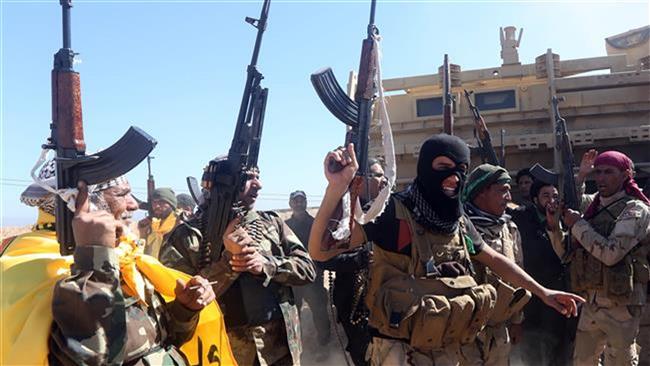 Iraqi forces to retake Tikrit from ISIL in 3 days: Official

Iraqi armed forces backed by volunteer and tribal fighters will manage to liberate within three days the conflict-ridden city of Tikrit in northern Salahuddin Province from the ISIL Takfiri terrorists, an Iraqi official says.

It would take no more than “72 hours” to flush out the militants from the city, Karim al-Nuri, a top commander of Badr volunteer fighters and the spokesman for the volunteer Popular Mobilization units, told AFP on Saturday from the village of Awja which lies south of Tikrit.

The last ISIL terrorists holed up in the city center are “surrounded from all sides”, Nuri said, adding, “Their number is now 60 to 70”.

The liberation of Tikrit will be announced once a path is cleared of explosives planted by the Takfiri militants, he added.

The remarks came one day after a police colonel, whose name was not released, said around 50 percent of the strategic city is now back in the hands of government forces.

Earlier this month, some 30,000 Iraqi troops launched large-scale operations to recapture Tikrit, which is the birthplace of former Iraqi dictator Saddam Hussein.

The volunteer forces, which include both Shia and Sunni members, have also joined the operation.

Located some 130 kilometers (80 miles) north of the capital, Baghdad, Tikrit was overrun by the ISIL terrorists in the summer of 2014 along with Iraq’s second-largest city, Mosul, and other areas in the country’s Sunni heartland.

The Takfiri militants that control large swathes of land in Iraq and neighboring Syria, have been carrying out horrific acts of violence, including public decapitations and crucifixions, against all Iraqi communities such as Shias, Sunnis, Kurds, and Christians in all areas under their control.