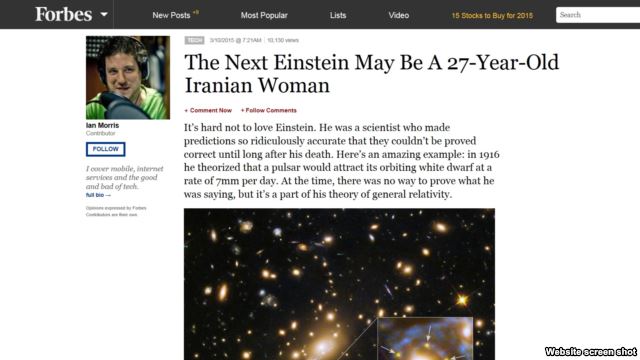 The next Einstein may be a 27-year-old Iranian woman

The scientific discovery engine ‘Sparrho’ has identified Iran’s ‘Zahra Haghani’ as being the potential future Einstein.

It’s hard not to love Einstein. He was a scientist who made predictions so ridiculously accurate that they couldn’t be proved correct until long after his death. Here’s an amazing example: in 1916 he theorized that a pulsar would attract its orbiting white dwarf at a rate of 7mm per day. At the time, there was no way to prove what he was saying, but it’s a part of his theory of general relativity.

Then, in 2003 scientists discovered a pulsar system of two objects, one ”weighs” about the same as our sun, but is only about 12 miles across and the other is a larger white dwarf. The smaller, neutron star spins 25 times per second, and the larger spins once every two seconds while orbiting the neutron star every 2.5 hours. Amazingly, Einstein was spot on with his prediction, and the two are indeed getting closer together at a rate of 7mm per day. 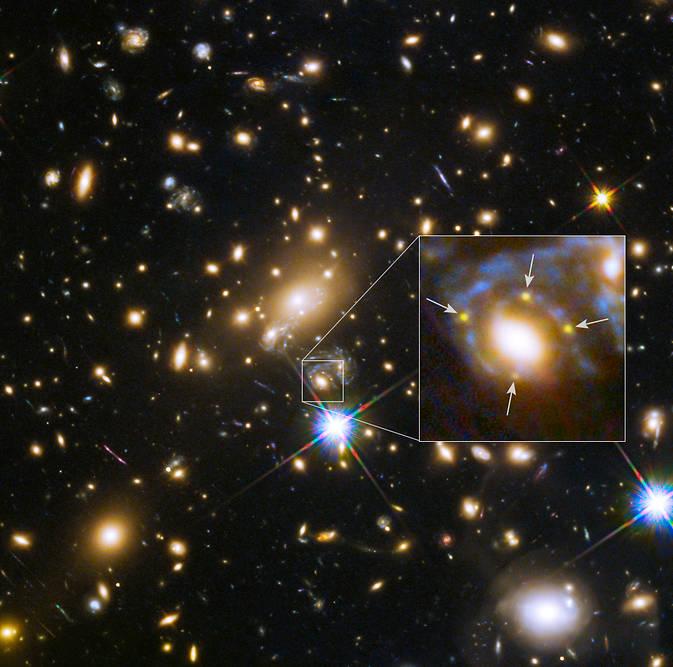 What’s more, just recently the Hubble telescope has managed to capture an image of an exploding star, the light from which is distorted by a group of galaxies. The resulting image features an “Einstein cross”, which shows four points of light, originating from the same supernova. Each of them starts at the same point, but the journey of their light to Hubble is affected by the universe’s dark matter.

Einstein’s paper, “The Field Equations of Gravitation” is 100 years old in December this year, but he remains one of the most famous scientists of all time. The question is, who is going to be the next Einstein? Well, Sparrho, a scientific discovery tool, used its own technology to uncover a list of people who are currently writing about subjects related to Einstein’s work.

Sparrho is an interesting company, and one that has an enormously bright future. It was developed when CEO Vivian Chan was getting her PhD in biochemistry at the University of Cambridge. She met a fellow researcher called Steve who was something of an encyclopaedia for science papers, and he made Chan realise that there was no existing resource that offered the same service he did.

That was a clear gap in the market, so she was inspired to create a digital “Steve” that would allow anyone – from fellow academics to mums looking for help with a child’s illness – to access relevant papers and information. Not just published papers, but any number of other sources too – it is, like any search engine, limitless in scope.

Already Sparrho checks more than 18,000 sources daily and features more than 2.1 million documents in its database, including the latest articles, patents, videos and even grants (a clever way to see what people are looking in to). Sparrho can also be trained to get the best information for your needs, and return only relevant results.

Through a partnership with The British Library, Sparrho has access to metadata for all of its content, dating back to the 1890s. That allows the company to search Einstein’s work and find all the people who have written similar papers.

So, back to that Iranian woman I mentioned. She’s called Zahra Haghani and you can read her paper, “Matter May Matter” online. I’ll avoid summarising because, well, it’s way beyond my rudimentary understanding of physics. But what Sparrho has done is analyse her writing, and determined that she was one of several writers who were statistically most similar to Einstein.

The others who were identified as being potential future Einsteins are:

Nikodem Poplawski (39) – Theoretical physicist at the University of New Haven. Famous for the theory that every black hole is a doorway to another universe, one of the top 10 discoveries of 2010.

Hajime Sotani (36) is a project assistant professor at the National Astronomical Observatory of Japan in the division of theoretical astronomy and the author of “Scalar gravitational waves from relativistic stars in scalar-tensor gravity.”

Shinji Tsujikawa (39) is Associate professor at the Tokyo University of Science. Author of “Cosmology in generalized Homdeski theories with second-order equations of motion.”

J. Brian Pitts (40) who is based at the University of Cambridge and the author of “Slightly biometric gravitation.”