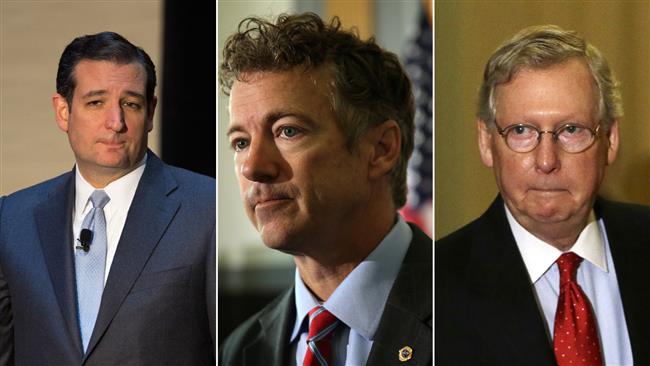 Tens of thousands of Americans have signed a petition to the White House demanding treason charges against 47 Republican senators who attempted to sabotage President Barack Obama’s efforts to reach a nuclear accord with Iran.

Over 155,000 people by Wednesday had signed the petition against the senators who they say committed “treasonous” offenses by writing an open to Iran’s leaders.

In a bizarre move on Monday, the Republican group ignored protocol and sent a letter to Iran, warning that whatever agreement reached with Obama would be a “mere executive agreement” that could be revoked “with the stroke of a pen and future Congresses could modify the terms of the agreement at any time.”

The White House has announced that it responds to such petitions when they achieve the 100,000-signature target.

The petition provides the Obama administration another opportunity to condemn the letter that appears at a time when US negotiators are preparing to return to Switzerland to participate in the nuclear talks between Iran and the P5+1 countries – the US, Britain, France, China, Russia, and Germany, which have entered a sensitive final stage.

According to the petition, the 47 Republican lawmakers “committed a treasonous offense when they decided to violate the Logan Act, a 1799 law which forbids unauthorized citizens from negotiating with foreign governments.”

The federal law prohibits unauthorized American citizens from interfering in relations between the United States and foreign governments. Violation of the Logan Act is a felony.

In an interview with Press TV on Wednesday, Mark Dankof, former US Senate candidate, said, “The 47 Republican senators in all likelihood had violated the Logan Act, which, if understood properly, would suggest very strongly that there may be a legal case against these Republican senators in regard to having committed treason.”

Tom Cotton (pictured below), a freshman senator from Arkansas, drafted the much-criticized letter. He claimed that the letter has more support in the US Congress than the Republican senators who have signed it.

On Tuesday, the New York Daily News denounced the 47 Republican senators as “traitors” for writing letter to Iran. The Manhattan-based newspaper used its front page to condemn the Republicans for sending the letter to Iran’s leaders.