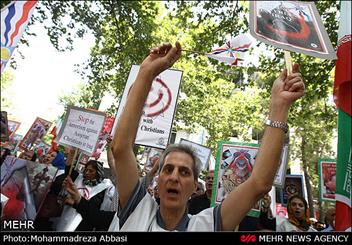 Iran’s Assyrians to gather in front of UN office

Iran’s Assyrian nationals will gather in front of the United Nations office in Tehran to protest killing and abducting of Iraq and Syria’s Assyrians by ISIL terrorists.

TEHRAN, Mar. 11 (MNA) – Iran’s Assyrian nationals will gather in front of the United Nations office in Tehran to protest killing and abducting of Iraq and Syria’s Assyrians by ISIL terrorists.

Iran’s Assyrian nationals are set to hold a gathering in front of the United Nations office Thursday in Tehran in protest against killing and kidnapping of up to 150 Iraqi and Syrian Assyrian Christian men, women and children by ISIL terrorist group.

Assyrian Universal Alliance and Iran’s Assyrian Community issued a statement expressing their grief over killing and kidnapping of Assyrians and their abhorrence towards the terrorist crimes by ISIL in Iraq and Syria.

“In the wake of ISIL heinous crimes against the Assyrian community in Iraq and Syria, Iran’s Assyrian Community, receiving necessary permits from the authorities, will hold a gathering in front of the United Nations office in Tehran on Thursday morning at 11:00, March 12, to voice their protest to the international communities across the world,” Assyrians said in their statement, condemning the West’s silence on the ISIL’s atrocities.

According to Aljazeera, at dawn on Monday, February 23, residents of about 10 lightly guarded Assyrian villages south of the Khabur River in northeastern Syria awoke to ISIL fighters sweeping through the area, burning homes and churches, and taking hostages.

The reported kidnappings of Assyrians are the latest blow to the ancient Christian presence in Iraq and Syria, heightening insecurity after a video was released by militants claiming allegiance to ISIL that appeared to show the beheading of 21 Egyptian Copts in Libya, the Guardian reported.