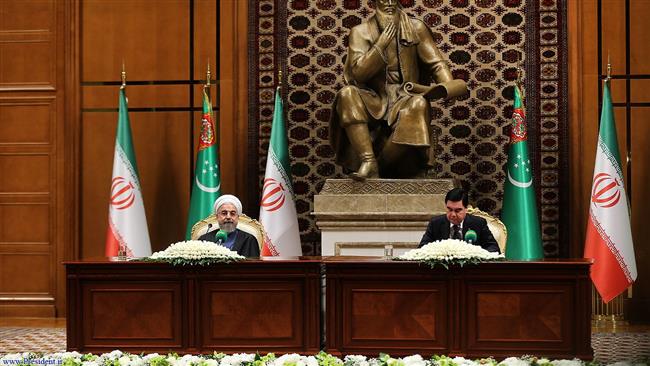 Iranian President Hassan Rouhani (L) in a press conference with his Turkmen counterpart Gurbanguly Berdimuhamedow in Ashgabat on March 11, 2015.

Iranian President Hassan Rouhani has called for the further enhancement of trade exchanges along a transportation corridor which connects Oman, Iran, Turkmenistan and Uzbekistan.

Rouhani on Wednesday said more efforts are needed for the major transportation line, known as the North-South Transport Corridor, to be activated as it can serve the business and economic interests of the countries in the region.

“The two countries (of Iran and Turkmenistan) are determined to activate the North-South Corridor, which goes through Oman, Iran, Turkmenistan and Uzbekistan, in order to meet the interests of the all countries in the region,” Rouhani said in a press conference with his Turkmen counterpart, Gurbanguly Berdimuhamedow, in Ashgabat.

Rouhani added that Iran and Turkmenistan have agreed to expand their trade volume from the current USD 3.7 billion to USD 60 billion in the next 10 years, adding that the two sides have also decided to increase the volume of their trade via railway and road by three and two folds, respectively, in the same period.

He touched upon the potential for the cooperation of the two countries in the Caspian Sea, saying that Tehran is ready to engage in joint operation with Ashgabat on marine-related activities including the activation of seaports and shipping lines.

“Iran and Turkmenistan view the Caspian Sea as the sea of peace, friendship and brotherhood,” Rouhani said.

In a meeting with Berdimuhamedow earlier in the day, Iranian President said Iran and Turkmenistan should tap into their potential to improve their bilateral relations.