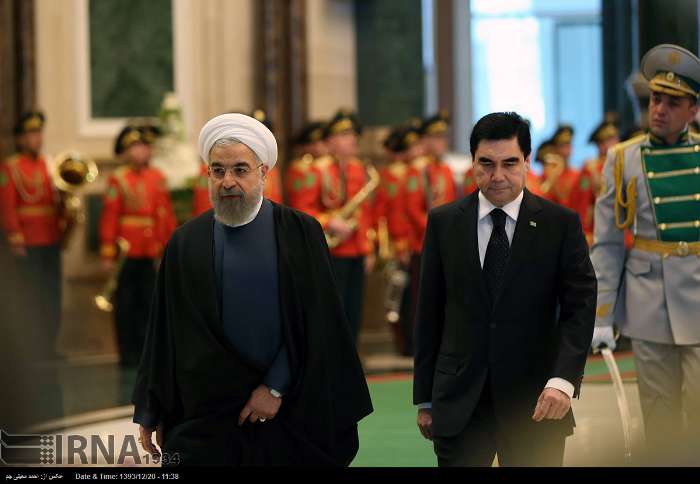 Iran, Turkmenistan should use potential to boost ties: Rouhani

Iranian President Hassan Rouhani says the Islamic Republic and Turkmenistan should tap into their potential to improve their bilateral relations.

“The officials of the two countries are well aware of the significance of very good bilateral relations, and we believe that we should utilize all existing potential to develop the ties,” Rouhani said during a meeting with his Turkmen counterpart Gurbanguly Berdimuhamedow in the Turkmen capital of Ashgabat on Wednesday.

Rouhani expressed hope that his talks with Turkmen officials during his visit to the Central Asian country would contribute to the promotion of reciprocal ties.

He welcomed his Turkmen counterpart’s invitation to attend a peace conference in the Central Asian country in late 2015 and said Iran always supports Turkmenistan’s policy of peace, friendship and impartiality.

The Turkmen president, for his part, praised friendly ties between Tehran and Ashgabat, saying the two countries have maintained good ties. He welcomed the further expansion of bilateral cooperation in different fields.

Stressing that the two neighboring countries enjoy common ground on the political front, Berdimuhamedow said that the Iranian and Turkmen governments have been working to contribute to global peace and security.

He also called for further enhancement of ties, particularly in the economic sector.

Heading a delegation, President Rouhani arrived in Ashgabat on Tuesday night on a two-day visit to discuss the expansion of ties between Tehran and Ashgabat.