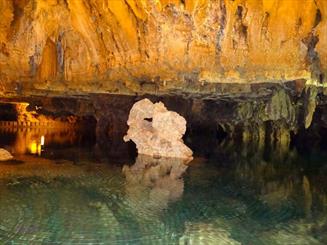 Ali Sadr Cave apt to get on World Heritage List

HAMEDAN, Mar. 10 (MNA) – Director General of Hamedan Cultural Heritage, Handicrafts and Tourism has said efforts must be made to remove obstacles on the way to get Ali Sadr Cave inscribed on UNESCO World Heritage List.

Reihan Soroush Moghadam maintained that certain conflicts such as human activities have caused issues for some of the Province’s natural and historical sites to be inscribed on UNESCO World Heritage List, adding Ali Sadr Cave would be immediately and unquestionably get on the list once the conflicts have been resolved.

He asserted that Hamedan was home to a great number of natural and historical monuments such as Arzanfoud and Samen troglodytic sites that could be easily inscribed on the World Heritage List.

“Currently, Iran has 17 world heritage sites inscribed in UNESCO but none of which belongs to Hamedan,” he said, noting Hamedan has at least 10 sites that could get on the list.

Iran’s Ali Sadr Cave is the world’s largest water cave, and a unique natural phenomenon which attracts millions of visitors every year.

The Ali-Sadr cave, which is located 75km to the northeast of the city of Hamedan, lies in the Subashi Mountains of Kaboudar-Ahang. More than 11 kilometers of the cave’s water canals have been discovered so far. Some routes are 10 to 11 kilometers long and all lead to the ‘Island’.

Icicle-shaped lime decorates the ceiling of the magnificent cave in some parts.

The steady dripping of mineral-containing water has created beautiful red, purple, brown, green and blue lime pillars in the shape of cauliflowers, needles and umbrellas.

Excavations and archeological studies of the cave have led to the discovery of ancient artworks, jugs and pitchers dating back to 12000 years ago. The animals, hunting scenes and bows and arrows depicted on the walls and passages of the exit section, suggest primitive man used the cave as their abode.

The 70-million-year-old cave which was first discovered by Iranian mountaineers in 1963, is visited by some 80,000 tourists annually.