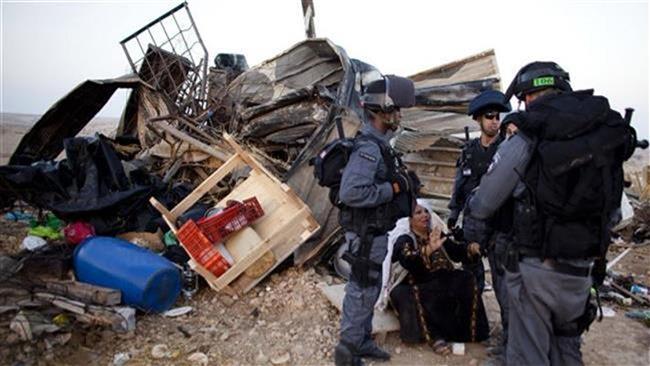 Israeli forces demolish Bedouin houses in the village of al-Arakib in the Negev desert. (File photo)

Israeli forces have razed to the ground a Palestinian house in a village in the occupied West Bank.

The Israeli forces destroyed the house, which belonged to Palestinian Judge Kifah Abd al-Rahim Sholi, in the village of al-Jarushiyya in Tulkarem Governorate on Monday, Ma’an news agency reported.

According to local sources, the Israeli forces raided the village and destroyed the two-story building under the pretext that the house had been constructed without an Israeli permit.

“Security forces carried out the demolition of an illegal building which was constructed without the necessary permits,” Ma’an news agency quoted a statement by the Israeli Civil Administration as saying.

Over 560 Palestinian homes have been destroyed in the occupied West Bank so far this year.

Israel is facing widespread global condemnation over its settlement construction in the occupied Palestinian lands.

The presence and continued expansion of Israeli settlements in occupied Palestine has created a major obstacle in the way of efforts to establish peace in the Middle East.

More than half a million Israelis live in more than 120 settlements built since Israel’s occupation of the Palestinian territories in the West Bank, including East al-Quds, in 1967.

The Israeli settlements are considered to be illegal by the United Nations and most countries because the territories were captured by Israel in the war in 1967 and are thus subject to the Geneva Conventions, which forbid construction on occupied lands.

In a similar move, the Israeli regime forces uprooted as many as 300 olive trees in the village of Salem in the city of Nablus .

Israeli bulldozers uprooted the trees on private Palestinian land on Monday, 48 hours after Palestinian farmers had been allowed to continue farming on the land, Director of the Nablus District Civil Liaison Office Luay al-Saadi said.

Earlier in March, Israeli police destroyed thousands of acres of wheat and other cereal crops in the Palestinian Bedouin village of Rakhama in Negev.

According to Ali Freijat, a local resident, as many as 14 Israeli tractors escorted by over 50 Israeli police vehicles destroyed the agricultural products and leveled the land.

The villages near Nablus have frequently been the scene of clashes between Palestinian farmers and Israeli settlers.

According to villagers living south of Nablus, Israeli settlers used chemicals in several cases last June to burn 1,500 trees there. In the blaze that followed, more than 49 acres of prime agricultural land was destroyed.

Israel has reportedly uprooted more than 800,000 olive trees in the occupied territories since 1967.