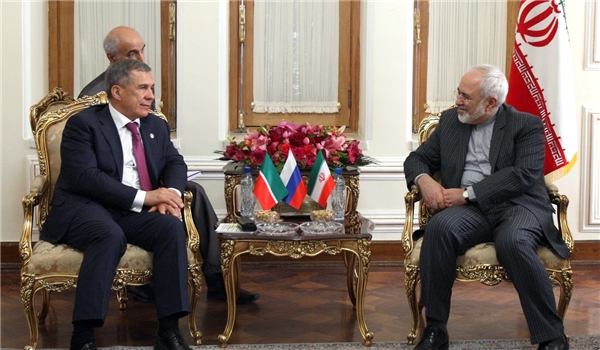 TEHRAN (FNA)- Iranian Foreign Minister Mohammad Javad Zarif and Tatarstan’s President Rostam Minnikhanov stressed the need for both Tehran and Kazan to do their best to pave the ground for the further promotion of bilateral ties in all domains.

In a meeting with the Tatar president on Monday, Zarif pointed to the deep relations between Iran and Russian Federation and Tatarstan Republic and said that Iran is ready to broaden its cooperation with Kazan.

He added that one of the two general consulates of Iran in Russian federation is in Tatarstan Republic.

President Minnikhanov, who is heading a 45-member delegation, appreciated Iranian hospitality and said that Tatarstan intends to increase its cooperation, especially in private sector with Iran.

The Tatar president referred to his meetings with senior officials of Iran and said that Tatarstan intends to hold joint economic commission of Iran and Russian Federation in Kazan city, with an aim to increase cooperation with Iran.