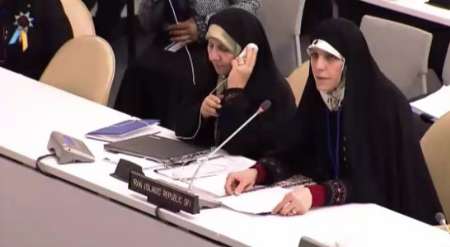 On Monday morning local time, Iran’s Vice President for Women and Family Affairs Shahindokht Molaverdi delivered her address in 59th Session of the Commission on Status of Women in New York.

“Throughout its 36 years of life, the Islamic Republic of Iran has always had the empowerment of women and improving their status in scientific, cultural, social, economic and political arenas on its agenda while observing their human dignity,” reads part of Molaverdi’s speech.

Here is the full text of her speech:

In the name of God, the Compassionate, the merciful

At the outset, I would like to express my pleasure to be here in this gathering, which is an indication of the increasing importance that the world attaches to women’s affairs.

During the last year, the comprehensive progress assessment of the Millennium Development Goals (MDGs) identified the most important achievements and challenges in the course of the implementation of the MDGs for women and girls. Common issues in the DMGs and the Beijing Declaration and Platform for Action as well as the UN Secretary General’s report to the 58th session of the Commission on the Status of Women indicate that, despite some progress towards empowerment of women and girls at the global level and some success in some areas like education, however, progress towards the full realization of women’s human rights is still slow and imbalanced. As long as such obstacles as conflicts, insecurity, shortage of financial resources and investment, especially those emanating from sanctions, the weakness of accountability mechanisms or lack thereof, environmental challenges, and so on exist, it will be impossible to reach a comprehensive gender balance. Furthermore, in parallel with chronic, traditional challenges, emerging new ones in modern forms during the last 20 years have had their impact on preventing the full realization of the projected goals.

Throughout its 36 years of life, the Islamic Republic of Iran has always had the empowerment of women and improving their status in scientific, cultural, social, economic and political arenas on its agenda while observing their human dignity.

The elevated status of women in Islamic and Quranic scriptures has been a base for the codification of the Islamic Republic of Iran’s laws, including its Constitution. It guarantees women’s material and spiritual rights and provides a normative framework through which Iranian women can be actively present in various arenas while maintaining their human dignity.

Beyond achievements already at hand, in the executive branch, we can point to the resolute actions by the current Iranian government towards realizing gender balance in various aspects of life, and more importantly striking a balance among multiple roles of women in order to eventually bring about the advancement of women’s status, gender justice, and strengthening the institution of family. In this regard, the National Authority for Women’s Affairs was upgraded from a center to the level of Vice-President. Efforts are also being made to strike a balance between capabilities and opportunities, as far as the mission of this vice-presidency is concerned.

The Islamic Republic of Iran’s 20‑year Vision Plan, as a multi-disciplinary document, has set out provisions on the ways and means on enhancing social justice, legitimate freedoms, protection of humans’ dignity and rights, social and judicial security, health, welfare, food security, social security, equal opportunities, appropriate distribution of income, acceptable sound environment and strengthening the institution of family, with no poverty, corruption and discrimination. Despite 8 years of imposed war on Iran and ever-increasing cruel, unjust sanctions against the Iranian nation, the Iranian women have achieved significant progress in the fields of education and research, science, entrepreneurship, economy and health, and continue to play their influential role in the society. Nonetheless, the government of the Islamic Republic of Iran is not negligent to the relatively low rate of women’s participation in political and decision-making positions and in the labor market as well as the shortage of data by gender. Therefore, it makes any effort to resolve these issues and expedite the growing trend of women’s empowerment.

I would like to emphasize few more key points:

Politics and power relations at the international arena and adoption of unilateral, force-based measures by certain countries, including the imposition of unjust sanctions, serve as an obstacle in the path of development, particularly the empowerment of women. The international community should pay special attention to this important point and take a collective measure in order to avoid politicization of legal and developmental issues and to lift the unjust sanctions.

Given the direct relation between security and development, and bearing in mind that women and children have always been the main victims of wars and conflicts, it is important that the international community addresses various types of insecurity, and above all, any form of violence and extremism under any pretext, and include them in the post‑2015 development agenda. The government of the Islamic Republic of Iran, as the initiator of the resolution on ‘a World against Violence and violent Extremis’, has already demonstrated its will to help realize this objective. It seems that an exit from the current situation urgently requires a motherly and womanly wisdom in global management so as for the world to become more secure, fair, and peaceful.

Complete fulfillment of the Beijing Declaration and Platform for Action requires identifying the root causes of the obstacles in the way of its realization and adopting new strategies and a comprehensive approach which does not overlook specific cultural, religious and historical characteristics of societies.

We should also bear in mind that the issue of women’s progress and empowerment has a mutual and close relation with social justice and human rights in general. Hence, it is necessary to include a gender approach in all development goals, in parallel with a specific goal focusing on gender justice. In this regard, increasing the responsibility of men along with boosting the regional and international cooperation is also necessary.