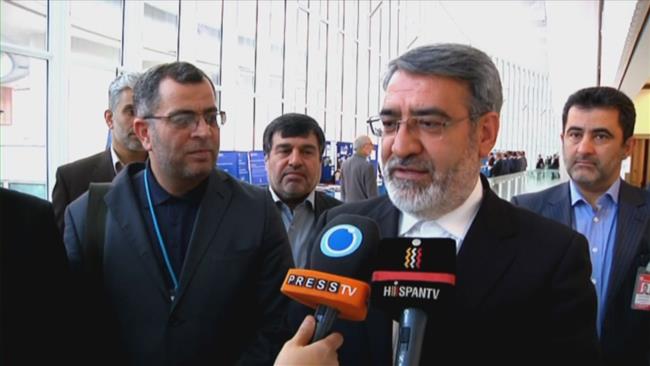 Iranian Interior Minister Abdolreza Rahmani Fazli speaks to Press TV on the sidelines of a UN meeting on narcotics.

The Iranian interior minister says the Islamic Republic has not seen any cooperation whatsoever from the UN and other countries in its fight against drug trafficking, Press TV reports.

“We have seen no kind of cooperation from the UN or other countries [in the fight against drug smuggling],” Abdolreza Rahmani Fazil told a Press TV correspondent on the sidelines of the 58th annual session of the Commission on Narcotic Drugs (CND) in Vienna, Austria.

The senior official also said that anti-Iran sanctions are hampering the country’s efforts to tackle the crisis.

“In fact, the opposite is true. We face a lot of difficulties regarding the purchase and transfer of equipment like X-ray machines because of the sanctions imposed on Iran,” Rahmani Fazli said.

He added that Iran expects realistic, logical and objective cooperation from the world in the campaign against narcotics.

The 58th annual session of CND organized by the United Nations Commission on Narcotic Drugs (UNODC) convened in Vienna to tackle a range of issue, including drug smuggling.

The Iranian interior minister delivered a speech at the forum, where he warned against selective and politically-motivated approaches towards fighting narcotics.

On the sidelines of the UN meeting, the Iranian minister held talks with Pakistani and Afghan officials, which were also attended by the UNODC executive director as part of the so-called Triangular Initiative to discuss action against illicit drugs.

The UNODC Executive Director, Yury Fedotov, said that the initiative has made advances against opium trafficking from Afghanistan.

“Our partners can be justifiably proud of the TI’s operations, which reinforces the importance of regional cooperation in countering illicit drugs. These activities included, in 2014, the February seizure of 1,020 kilograms of Hashish and the early June seizure of 150 kilograms of opium,” he said.

On the sidelines of the UN meeting, the Iranian delegation also held bilateral talks with the UN delegation, headed by Fedotov, to discuss Iran’s efforts in countering drugs business.

Iran has spent more than USD 700 million to seal the borders and prevent the transit of narcotics destined for European, Arab and Central Asian countries. The war on drug trade originating from Afghanistan has claimed the lives of nearly 4,000 Iranian police officers over the past 34 years.