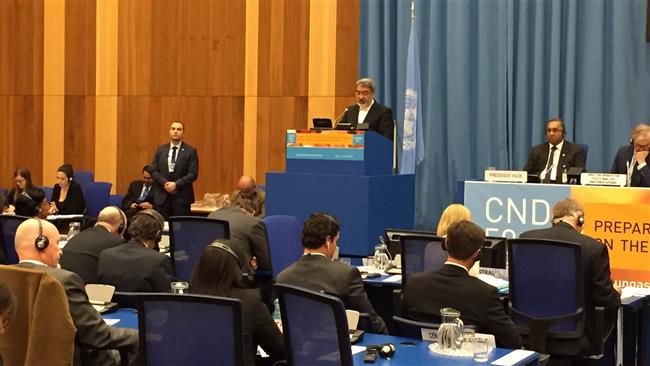 Iranian interior minister has warned against the threat of narcotics to the health and sustainable development of all countries, presenting proposals to facilitate an effective campaign against illicit drugs.

Addressing the 58th annual session of the Commission on Narcotic Drugs in Vienna on Monday, Abdolreza Rahmani Fazli said the international community should give priority to and support the issue of alternative livelihood in areas affected by drug cultivation and production.

He added that all countries should proceed with cooperation to block the entry of illicit drug-related money into international financial systems.

The Iranian minister said all countries should take “into account the need for sharing of experiences in the field of drug demand reduction as a major issue in bilateral, multilateral, regional and international cooperation.”

Rahmani Fazli stressed the “need for further support by the global community for strengthening regional cooperation mechanisms in the fields of border control management and operational intelligence-sharing, including the Triangular Initiative that has been formed within the framework of cooperation by the Islamic Republic of Iran, Afghanistan and Pakistan.”

He called for the establishment of a mechanism for “coordinated and integrated contacts” among the security and law enforcement agencies of countries and international bodies for the timely exchange of intelligence in order to carry out operations.

Rahmani Fazli, who is also the secretary general of Iran’s Drug Control Headquarters, stressed the importance of obtaining advanced equipment such as X-ray machines and radar systems for Afghanistan and its neighboring countries in proportion to the enormity of the drug flow to reinforce border control and monitor the maritime route as a clear manifestation of the principle of shared responsibility.

The Iranian minister said despite “considerable progress” made by world countries proportionate to their social and economic conditions in implementing a balanced strategy for drug control, countering money laundering and enhancement of regional and international cooperation, the objectives pursued by the political declaration on global drug control, which was adopted at the 52nd session of the Commission on Narcotic Drugs in 2009, have not been fully realized.

“Regretfully the progress made in the field of drug control has not been steadily achieved in different parts of the world,” he added.

Sharing a border of over 800 kilometers with Afghanistan, which is the largest producer of narcotics in the world, Iran is the main transit route for the smuggling of drugs from Afghanistan to Europe.

Iran has spent billions of dollars to seal its borders and prevent the transit of narcotics destined for European, Arab and Central Asian countries. The war on drug trade, a lucrative business originating in Afghanistan, has also claimed the lives of nearly 4,000 Iranian police officers and soldiers.