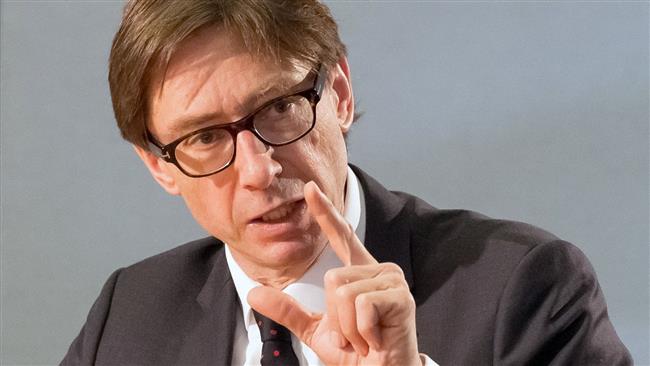 Germany’s Ambassador to the US Peter Wittig speaks to reporters during an interview with The Associated Press in Washington on March 9, 2015.

The German ambassador to Washington has described the talks between Iran and the P5+1 countries over Tehran’s nuclear energy program as one of the most important foreign policy issues in the world, which are now “nearing an end game.”

“This is one of the most important foreign policy issues on, I think, the international agenda. We’re entering here into the end game,” Peter Wittig said in Washington on Monday.

Wittig, who was speaking along with the French and British ambassadors to American lawmakers about the nuclear talks, expressed hope that Tehran and the six countries can reach an “unambiguous, verifiable and permanent deal”.

“We harbor certain hopes that this will be possible, but there is still a lot of work to do on the negotiation table,” the German diplomat said.

He added that efforts to make the nuclear deal possible are “important and a high priority” for Germany.

“We made the case for not imposing sanctions, additional sanctions, while the negotiations were going on. That point was made clear to everybody,” Wittig pointed out.

The German envoy’s comments followed a warning by a group of US Republican senators that a potential deal between Washington and Tehran will be short-lived.

In an open letter to Iran on Monday, 47 Republican senators warned Tehran that any nuclear deal with President Barack Obama could last only as long as he is in office.

The US senators said any deal signed by the Obama administration must be approved by Congress or it could be reversed by next president after Obama leaves office in January 2017.

Iranian Foreign Minister Mohammad Javad Zarif said later on Monday that the letter by US Republican senators to undermine the P5+1 group’s efforts on a nuclear agreement with Iran was just a publicity stunt without any legal value.

He told reporters that the letter has “no legal value and is mostly a propaganda ploy.”

“It is very interesting that while negotiations are still in progress and while no agreement has been reached, some political pressure groups are so afraid of even the prospect of an agreement that they resort to unconventional methods, unprecedented in diplomatic history,” Zarif said.

Representatives of Iran and the P5+1 group of countries wrapped up the latest round of nuclear negotiations in the city of Montreux, Switzerland, on March 6.

The Iranian foreign minister and US Secretary of State John Kerry wrapped up intense nuclear negotiations in Montreux on March 4.

Representatives of Iran and the United States had also held three rounds of intense negotiations in Geneva on February 22-23.