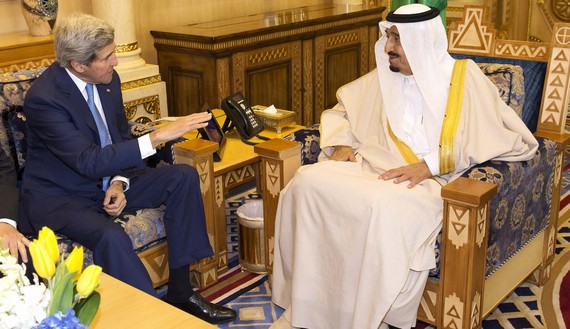 US Secretary of State John Kerry (L) meets Saudi King Salman bin Abdul-Aziz Al Saud Salman at Diriyah Farm in Diriyah, March 5, 2015. Kerry met Gulf Arab foreign ministers in Riyadh to brief them on progress in the nuclear talks with Iran and offer reassurance that any deal would not damage their interests. (photo by REUTERS/Evan Vucci)

Saudi Arabia is quietly preparing for an international nuclear agreement with Iran that it fears will rehabilitate its Shiite Persian rival. King Salman bin Abdul-Aziz Al Saud’s approach eschews the public spectacle of Israeli Prime Minister Benjamin Netanyahu’s speech to Congress (indeed, the Saudis don’t want any association with Israel) and instead focuses on regional alliances to contain an emergent Iran.

The Saudis publicly welcomed US Secretary of State John Kerry’s assurances in Riyadh last week that Washington will not accept a bad nuclear deal with Iran, and that a deal will not inaugurate a grand rapprochement between Washington and Tehran. They remain deeply skeptical about the negotiations, however, and are preparing for any outcome in the P5+1 process.

The Saudis recognize that a successful deal between Iran, the US, Russia, China, Britain, France and Germany will enjoy broad international backing and United Nations endorsement. Riyadh has no interest in being isolated in a dissenting minority with Netanyahu against a deal backed by a global majority. The royal family despises Israel, and Netanyahu is regarded as a war criminal by most Saudis. Any hint of mutual interest with Israel is unpalatable in the kingdom.

So the Saudi approach is to strengthen its regional alliances for long-term confrontation with Tehran. Most immediately, this means strengthening the unity of the Gulf Cooperation Council (GCC). It has strong allies in Abu Dhabi and Manama. In Riyadh’s eyes, there are two weak links in GCC collusion against Iran: Oman and Qatar. Neither is likely to give up their bilateral lucrative ties to Iran, but Salman is pressing both to adhere to GCC unity and not facilitate Iranian subversion.
Read more here