Iran, IAEA will hold next round of talks in April 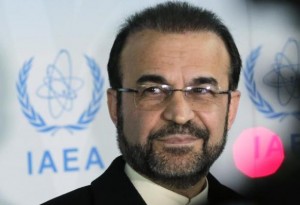 Iran’s ambassador to the International Atomic Energy Agency (IAEA) Reza Najafi attends a news conference at the headquarters of the IAEA in Vienna December 11, 2013. REUTERS/Leonhard Foeger

Iran’s ambassador to the International Atomic Energy Agency (IAEA) says the next round of talks between Iran and the UN nuclear agency will be held in Tehran in April.

Speaking to reporters, Reza Najafi added that his technical talks with IAEA Deputy Director General and head of the Department of Safeguards, Tero Varjoranta, in Tehran on Monday mainly focused on the “two remaining practical measures.”

“It was agreed that we proceed with our cooperation and also discussed ways to accelerate cooperation,” Najafi added.

He noted that the two sides held discussions about technical topics which showed their “serious determination” to expand cooperation.

A five-member IAEA team, headed by Varjoranta, arrived in Tehran on Monday for a day-long visit and held technical talks with Iranian officials including Najafi and representatives from the Atomic Energy Organization of Iran (AEOI) and Iran’s Foreign Ministry.

The IAEA claims that Iran has not yet addressed specific issues on its nuclear program such as questions on alleged research activities into explosives testing and neutron calculations.

Iran has rejected the accusations as baseless and repeatedly emphasized its readiness for full cooperation with the IAEA as part of its transparency efforts to solve the country’s nuclear issue.

On March 2, the IAEA Director General Yukiya Amano once again verified lack of any diversion toward non-peaceful purposes in Iran’s declared nuclear material.

“Concerning safeguards implementation in Iran, the agency continues to verify the non-diversion of nuclear material declared by Iran under its Safeguards Agreement,” Amano said in an address to the agency’s Board of Governors in the Austrian capital city of Vienna.

Iran says it has granted the IAEA access to sites which the agency claims need to be investigated in order to clarify the outstanding issues.