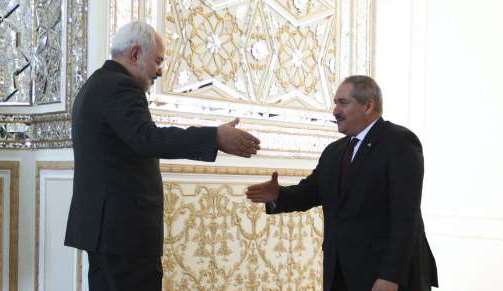 Tehran, March 7, IRNA – Foreign Minister Mohammad-Javad Zarif said on Saturday that the Zionist regime is working hard to divert attention of regional states from main issues and the threat it has posed to peace and security of the region.

Speaking to his Jordanian counterpart Nasser Judeh in Tehran, Zarif called for regular consultations and cooperation among regional countries on extremism and terrorism.

He said savage terrorism, an instance of which had been barbaric killing of Jordanian pilot, is not acceptable and harmful to the image of Islam.

‘They commit such crimes and work hard to divide us,’ Zarif said, adding that the Islamic Republic of Iran believes in serious debate and engagement over various regional issues to reach a mutual understanding.

He said that relations with the neighboring states and cooperation on regional issues are among main priorities of Iran’s foreign policy.

Zarif said that the Islamic Republic of Iran is keen on the regional issues to be resolved by negotiations in the context of the regional arrangements.

‘The Middle East and the Persian Gulf are our region and we are part of it. Iran is ready for cooperation for a long-term cooperation on various subjects with all regional states.’

Judeh said that talks with Iranian officials under the current circumstances in the region are of high importance.

‘Iran is an important country in the region and we believe that we can have exchange of opinion on various regional subjects with Tehran.’

He said terrorism and extremism are main problems of the region, adding that it should not be interpreted as Shia-Sunni conflict.

The Jordanian Foreign Minister said that Jordan’s foreign policy calls for consultations about the regional issues as the most fundamental principles.