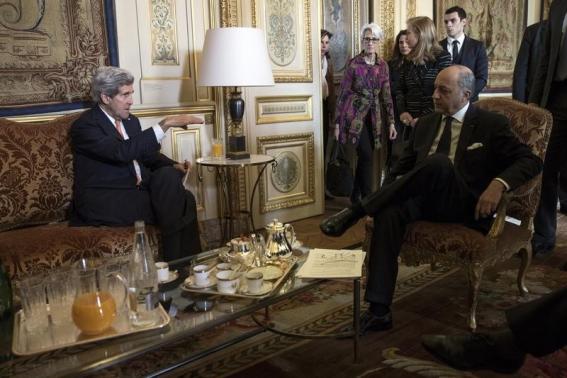 (Reuters) – The United States and France sought on Saturday to play down any disagreements over nuclear talks with Iran, saying they both agreed the accord now under discussion needed to be strengthened.

“We are on the same page,” U.S. Secretary of State John Kerry told reporters after talks with French Foreign Minister Laurent Fabius in Paris. “If we didn’t think that there was further to go, as Laurent said, we’d have had an agreement already,” Kerry added.

The aim of the negotiations is to persuade Iran to restrain its nuclear program in exchange for relief from sanctions that have crippled its economy. Iran, a major oil exporter, wants the sanctions scrapped swiftly, the powers only in phases.

France’s Fabius said on Friday commitments offered by Iran in the nuclear talks with six world powers do not go far enough and more work needed to be done, notably on what he called “volume, checks and duration”.

On Saturday, he made clear that by volume he meant the number and quality of centrifugesIran might be allowed to operate under any deal. By checks, he meant an inspection and verification regime to ensure Iran does not violate the deal.

“There is still work to be done,” said Fabius, who was also hosting his British, German and EU counterparts in Paris.

France, a U.N. Security Council veto-holder, has long held out for strict terms, linking any loosening of international sanctions on Iran’s oil-based economy to commitments by Tehran to demonstrate that its nuclear work is as peaceful as it says.

The discovery in 2013 that the United States was holding secret talks with Iran was an opportunity for Paris, by saying ‘no’ to a deal, to assert itself internationally and to rebuke Washington for backing down on bombing Syria as punishment for using chemical arms.

“It is a multilateral negotiation, but we want to make sure that our positions are aired,” said Fabius, who stressed several times the need for a “solid agreement”.

U.S. officials privately bristle at what they sometimes see as France’s effort to insert itself into the diplomacy on Iran and other issues. Some other diplomats close to the talks say Washington is rushing into a deal with Iran.

From the outside, it appears as if the negotiations are fundamentally a U.S.-Iranian bilateral discussion, with the other nations briefed and brought in periodically.

As well as the United States and France, the other world powers involved in the Irannegotiations are Britain, China, Germany and Russia.

He plans to meet Zarif again on March 15 ahead of talks with all sides aimed at sealing some form of understanding by the end of March before a final deal in June.

“The next couple of weeks are crucial,” said EU policy chief Federica Mogherini.