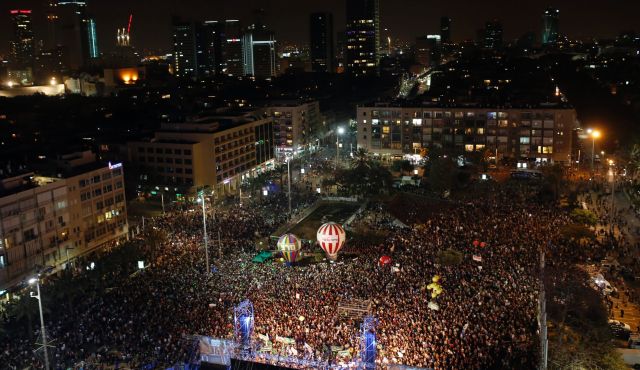 According to the “Israel Wants Change” event’s organizers, more than 35 thousand people attended. Other officials estimate between 25,000-30,000 protesters turned out to the rally.

“No one denies that Iran’s nuclear program is a threat, but going to war with the U.S. is not the way to stop it,” Dagan said.

“Benjamin Netanyahu has served as prime minister for six years straight,” Dagan noted, “six years in which he has not led a single genuine process of change to the face of the region or the creation of a better future. On his watch, Israel conducted the longest [military] campaign since the War of Independence.” Posing a question to the prime minister directly, Dagan added:

“Why should you be responsible for our fate if you are so afraid to take responsibility?”

“I am not a politician and not a public figure, and I came here this evening without personal aspirations, not looking for a position and without a grudge or bitterness,” he said.

“We deserve leadership that will set new priorities. It has long not been a question of left wing and right wing. It’s a question of a path, a vision, a different horizon.”

Michal Kesten-Keidar, widow of Lt.-Col. Dolev Keidar, who was killed in last year’s war in Gaza, made an impassioned plea for voters to elect a leadership that would prevent more bloodshed with the Palestinians. “How many women like me will lose their heart until we reach an agreement?,” asked Kesten-Keidar. “An entire election campaign has gone by without remembering the blood that was shed over the summer,” Kastan Keidar said. “But last summer, I lost the love of my life during the war, and I came here to request of you, when you go to cast your ballots, to vote for who will prevent the next war, for who is prepared to do everything possible to prevent more deaths.”

“Mr. Prime Minister… it’s impossible to speak all the time about Iran and to turn a blind eye to the bloody conflict with the Palestinians which costs us so much blood,” she said.

The rally, which commenced at 7:30 P.M., is organized by the One Million Hands movement. The event was expected to draw people from the center and left of the political map who are seeking a change in Israel’s priorities, refocusing on health, education, housing, wages, the cost of living and the elderly.

The organizers and key speakers said the rally was be about expressing support for a return to a way of life that is normal and sane, to a life with dignity and peace between Israel and its neighbors.

“If someone doesn’t care if there are wars, why should he care about the cost of living? I do not accept the claim that there is no one to vote for so don’t vote, or the claim that the Israeli public is fated to live with war. The leadership has responsibility to those combat soldiers and a responsibility to prevent the killing,” said Kesten-Keidar.

Levin, who was one of Prime Minister Benjamin Netanyahu’s commanders in the Israel Defense Forces, said, “When the prime minister is in the United States he is the leader of all of us, but the little that he said in Congress would have better been said privately in the Oval Office – then there might have been a chance to exert influence.”

Speaking last week at a press conference called by Commanders for Israel’s Security, a movement of which he is a member, Levin added, “The rule of one people over another makes the strongest and most moral army in the world immoral and weak. Israel must take back the initiative, set its final borders to ensure security and a solid Jewish majority. Anyone who is afraid to lead the initiative to diplomatic and security arrangements in the region will, in the end, give it all up, down to the last millimeter. Only initiative can keep some of the territory and settlement in our hands.”

Dagan also criticized Netanyahu. “As someone who has served the country for 45 years in security posts, including during some of its hardest hours, I feel we are at a critical period for our future and security,” he said. “I have no personal interest in the prime minister, his wife, his expenses and his way of life. I am talking about the policy he leads. It is a destructive policy for the future and security of Israel. And as someone who raised children here and is now raising grandchildren here, and who believes with all his heart in the Zionist dream, I feel there is a danger to the continued existence of this dream, and that is why I will come to speak.”

Among the organizations taking part are the Kibbutz Movement; a group of combat soldiers who led the crossing of the Suez Canal in the 1973 Yom Kippur War; the Movement for the Future of the Western Negev; representatives of factory workers who recently lost their jobs; and residents of the Gaza border area.