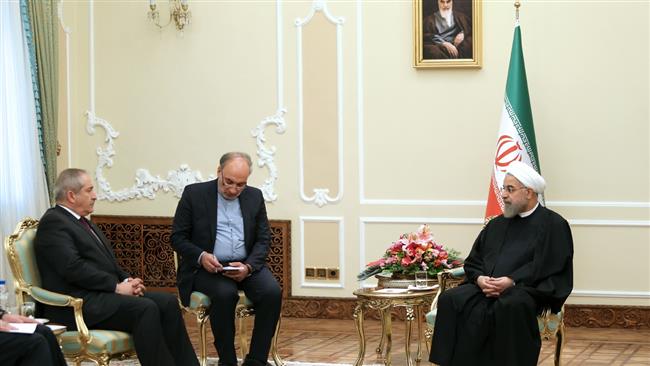 Iranian President Hassan Rouhani says the Middle East will not enjoy security and stability unless the international community takes action to stop the Israeli regime’s crimes.

Security and stability in the Middle East will only reach “an acceptable level” when the international community and regional countries make a concerted effort to compel the Zionist regime to stop its acts of aggression and crimes, Rouhani said in a meeting with Jordanian Foreign Minister, Nasser Judeh, in the Iranian capital, Tehran, on Saturday.

“It would be possible to establish sustainable security and stability in the region if all regional countries play a positive role,” he added.

Rouhani said Iran seeks regional security, stability and development, stressing that only regional countries, through collective cooperation, can solve the problems of the region.

“Today, terrorism is a challenge and threat to all and this is an undeniable fact. The Islamic Republic of Iran has warned against the spread of terrorism from the very beginning, stressing that the only way to stop it is cooperation and a collective campaign,” he said.

Pointing to regional developments including those in Syria, Iraq, Lebanon and Yemen, the Iranian president said regional issues can only be settled through diplomatic solutions without any foreign interference in the domestic affairs of countries.

Rouhani also said Tehran is ready to work with Amman for the full restoration of the Palestinians’ right and the liberation of the holy city of al-Quds (Jerusalem) from Israeli occupation.

Touching on bilateral ties, the Iranian president said the Islamic Republic sees no limits to the improvement of relations with Jordan and called for the enhancement of Tehran-Amman cooperation.

The Jordanian official, for his part, underlined the development of ties with Iran, describing the Islamic Republic as a significant neighbor for the Arab world.

Judeh added that Jordan supports the Palestinian nation’s right to establish a government with Quds as its capital.

He also voiced his country’s support for Iran’s talks with the P5+1 group of countries – the US, the UK, Germany, France, Russia and China – to settle the dispute over the Islamic Republic’s nuclear program.