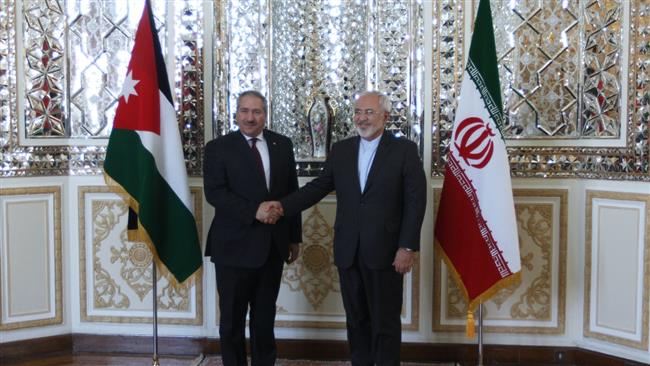 “The Zionist regime is trying to distract regional countries from major issues to minor matters and vigilance in the face of this Israeli ploy will benefit all in the region,” Zaif told his Jordanian counterpart, Nasser Judeh, in the Iranian capital, Tehran, on Saturday.

Denouncing crimes by terrorist groups, including the recent burning alive of a Jordanian pilot by ISIL Takfiri militants, Zarif underlined the need for consultations and cooperation among regional countries on fighting extremism and terrorism.

“The bestial terrorist measures, an example of which we witnessed in the death of the Jordanian pilot, are unacceptable and will result in the tarnishing of the image of Islam,” Zarif said.

On February 3, ISIL released a video online showing the Takfiri terrorists purportedly setting alight Jordanian pilot, Moaz al-Kassasbeh, who had been taken hostage in December 2013. Kassasbeh was captured by ISIL on December 24, 2014, after his F-16 jet crashed while flying over northern Syria on a mission against the terrorists.

He also described relations with neighboring countries as a top priority in Iran’s foreign policy, saying, “Iran is ready to cooperate with all regional countries on long-term plans for different issues.”

The Jordanian foreign minister, for his part, described Iran as an important country in the region and called for Tehran-Amman talks on different challenges facing the Middle East.

Judeh said terrorism and extremism are the main challenges in the region, saying both Sunnis and Shias are targeted by such threats.

Instability, violence, and extremism have plagued the Middle East over the past few years, and Jordan believes that stability and security must be restored to the region as soon as possible, Judeh said, calling for unity and solidarity among all Islamic countries toward this objective.

The ISIL terrorists control parts of Iraq and neighboring Syria. They have engaged in crimes against humanity in the areas under their control, committing crimes against different minorities and communities.