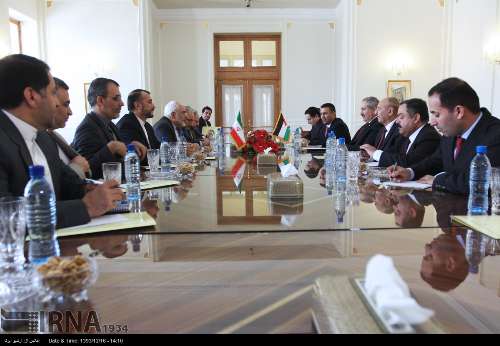 TEHRAN (Tasnim) – Iranian and Jordanian foreign ministers in a Saturday meeting in Tehran emphasized the need for joint efforts to deal with the regional problems, particularly the threat of extremism and terrorism.

Iran’s top diplomat Mohammad Javad Zarif and his Jordanian counterpart Nasser Jude held a meeting in Tehran on Saturday, with bothdescribing unity and concerted action as the best procedure to address the Middle East problems.

“Iran is ready to cooperate on a long-term plan on diverse subjects with all regional countries,” he noted.

He also condemned the “brutal acts of terrorism” by the extremist groups, like the burning alive of a Jordanian pilot by the ISIL militants in early February.

Zarif said the Takfiri terrorists damage the image of Islam and also try to create rift among the regional countries.

The visiting Jordanian diplomat, for his part, hailed Iran as a “major country in the region” with which Jordan can consult on different issues.

Jude also stressed the need for unity among the Islamic nations in order to restore “political stability and security” to the region in the wake of violent and extremist moves.

“Dialog with the Iranian brothers and consultation on the regional issues is important for us,” the Arab minister noted.