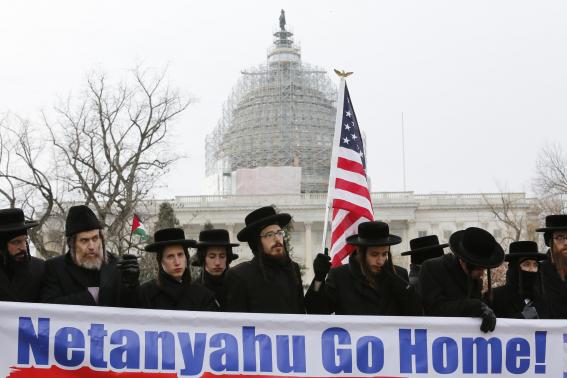 (Reuters) – Israeli Prime Minister Benjamin Netanyahu warned the United States on Tuesday that it was negotiating a bad deal with Iran that could spark a “nuclear nightmare,” drawing a rebuke from President Barack Obama and exposing a deepening U.S.-Israeli rift.

They delivered dueling messages within hours of each other.

Netanyahu made his case against Obama’s Iran diplomacy in a speech to Congress that aligned himself with the president’s Republican foes. Obama responded in the Oval Office, declaring in a frustrated tone that Netanyahu offered “nothing new.”

In its response, the Iranian government denounced Netanyahu’s 39-minute speech as “boring and repetitive,” the state news agency IRNA said.

In an appearance boycotted by dozens of Obama’s fellow Democrats, Netanyahu said Iran’s leadership was “as radical as ever” and could not be trusted and the deal being worked out by the United States and other world powers would not block Iran’s way to a bomb “but paves its way to a bomb.”

“It will all but guarantee that Iran will get those nuclear weapons, lots of them,” the Israeli leader said. “We’ll face a much more dangerous Iran, a Middle East littered with nuclear bombs and a countdown to a potential nuclear nightmare.”

His speech, a point-by-point critique of Obama’s strategy, drew 26 standing ovations in the Republican-controlled chamber.

Netanyahu both inveighed against the emerging deal and suggested broadening the scope of negotiations to require a change to what he described as Iran’s “aggressive” regional posture – an idea swiftly rejected by the Obama administration as de facto “regime change” in Tehran.

But Netanyahu, who said a nuclear-armed Iran would threatenIsrael’s existence, also avoided any call for new sanctions now or for a total rollback of Iranian nuclear technologies – a signal thatIsrael might be able to resign itself to less.

Obama said the prime minister offered no “viable alternatives” to the current course of negotiations.

Netanyahu’s speech culminated a diplomatic storm triggered by his acceptance in January of a Republican invitation that bypassed the White House. Many Democrats considered it an affront to the president.

Obama refused to meet Netanyahu, saying that doing so just ahead of Israel’s March 17 general election would be seen as interference. The president, who has a history of testy encounters with Netanyahu, said he did not watch the televised speech but read the transcript.

Underscoring the partisan divide, House Democratic leader Nancy Pelosi called the speech “an insult to the intelligence of the United States” and said she was so “saddened by the condescension toward our knowledge of the threat posed by Iran” that she was near tears.

As many as 60 of the 232 Democratic members of Congress sat out the address. Their absence was especially striking given Congress typically unites around the issue of Israeli security.

The boycott by so many lawmakers could raise political heat on Netanyahu at home. Many Israelis are wary of estrangement from a U.S. ally that provides their country with wide-ranging military and diplomatic support.

Netanyahu entered the chamber to a cacophony of cheers, shaking hands with lawmakers, including House Speaker John Boehner.

At the start of the speech, he sought to defuse the intense politicization of his appearance, saying he was grateful to Obama for his public and private support of Israel, including contributions to Israel’s Iron Dome anti-missile system.

Netanyahu then launched into a scathing attack on the Iran diplomatic efforts, which face an end-of-March deadline for a framework accord. But Netanyahu did not specifically call for new U.S. sanctions, something Obama has said would undermine ongoing talks and would prompt a veto if passed by Congress.

Iran denies it is seeking a nuclear bomb. Israel is widely assumed to possess the region’s only nuclear arsenal.

“If the world powers are not prepared to insist that Iran change its behavior before a deal is signed, they should at the very least be prepared to insist that Iran changes its behavior before the deal expires,” Netanyahu said. He added that while Israel and similarly minded Arab states might not like such a deal, they could live with it, “literally,” he said.

Republican House Majority Whip Steve Scalise called it a “privilege” for Netanyahu to address Congress and said he shared his concerns that “these current negotiations with Iranwill not adequately prevent them from obtaining nuclear weapons capability.”

But former U.S. Ambassador to Israel Martin Indyk, who has had years of dealings with Netanyahu, said: “The prime minister should say not only what is wrong with the deal, but how to get from where we are today to a deal that he could accept. And we didn’t hear that in the speech. But you can’t beat something with nothing.”

Iran must commit to a verifiable freeze of at least 10 years on sensitive nuclear activity, but the odds are still against sealing a final agreement, Obama told Reuters on Monday.

Obama said a final deal must create a one-year “breakout period” for Iran, which means it would take at least a year for Tehran to get a nuclear weapon if it decides to develop one, thereby giving time for military action to prevent it. Aides hope it can be a signature foreign policy achievement for Obama in his final two years in office.

Netanyahu has said such a deal would allow Iran to become a “threshold” nuclear weapons state. He has hinted at the prospect for Israeli military strikes on Iranian nuclear facilities as a last resort, but made no such threat in his speech.