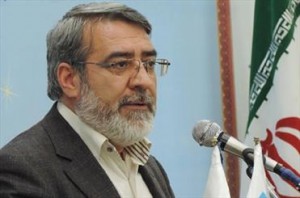 TEHRAN (FNA)- Iranian Interior Minister Abdolreza Rahmani Fazli announced on Wednesday that Tehran is taking legal procedures to extradite terrorist leader Abdo-Sattar Rigi, the brother of Abdolmalek Rigi – who led the Jundollah terrorist group and was arrested and executed by Iran in early 2011 – from Pakistan.

“We have asked the foreign ministry to pursue the issue and extradite this person (Abdo-Sattar Rigi) to Iran,” Rahmani Fazli told reporters in Tehran on Wednesday.

“Based on the laws, Pakistan should also cooperate with us in the extradition of this person,” he added.

Also in relevant remarks today, Iran’s Interpol Chief Brigadier General Massoud Rezvani confirmed the news that Abdo-Sattari Rigi was arrested in Pakistan, and said Iran was chasing him for 5 years.

“Based on our information, he is (Abdolmalek) Rigi’s cousin, and a red alert was issued for him based on the evidence that we provided to the Interpol,” Rezvani said, and continued, “The documents for his extradition have been presented.”

Iranian security officials disclosed on Monday that the brother of Abdolmalek Rigi was arrested in Pakistan, while Islamabad sources had declared on Sunday that Pakistan had arrested Abdolmalek’s cousin, Salam Rigi who led Jeish al-Adl terrorist group.

“Based on our information, one of the two captured terrorists is Sattar Rigi, a brother of Abdolmalek Rigi,” Iranian Deputy Interior Minister Hossein Zolfaqari said on Monday.

He noted that Sattar Rigi has conducted many terrorist operations in the border regions in Southeastern Iran.

On Saturday, Pakistani sources told the country’s media that authorities in Southwestern Pakistan arrested the ringleader of Jeish al-Adl terrorist group as he was traveling on a bus from the lawless border area.

Salam Rigi is accused of involvement in suicide bombings in Iran and Pakistan, as well as sending terrorists to the conflicts in Iraq and Syria.

Other sources said Sattar Rigi (Abdolmalek’s brother) was carrying his cousin’s ID card at the time of arrest, but further investigations have revealed his true identity as stated by the Iranian deputy minister.

But later reports proved that the captured terrorist was Abdo-Sattar Rigi.

Sattar’s two older brothers, Abdolmalek and Abdolhamid Rigi, who led a more powerful terrorist group, Jundollah, were both captured and condemned to death by Iran earlier.

After Iran captured most Jundollah members and disbanded the terrorist group, the remaining militants created Jeish al-Adl and conducted several terrorist operations in Iran in the last two years.

In its latest terrorist operation in Iran, Jeish al-Adl abducted five Iranian border guards in Jakigour region of Sistan and Balouchestan Province and took them to Pakistan in 2014. After two months of abduction, four of them were released and the terrorist group claimed that it had killed one of them.

In another case, 14 Iranian border guards were killed and 6 more were injured during the terrorist attack by outlaws affiliated to Jeish al-Adl terrorist group in Saravan border region in October 2013.

The terrorists of the Jeish Al-Adl radical Sunni Wahhabi movement flee into Pakistan after each operation in Iran.