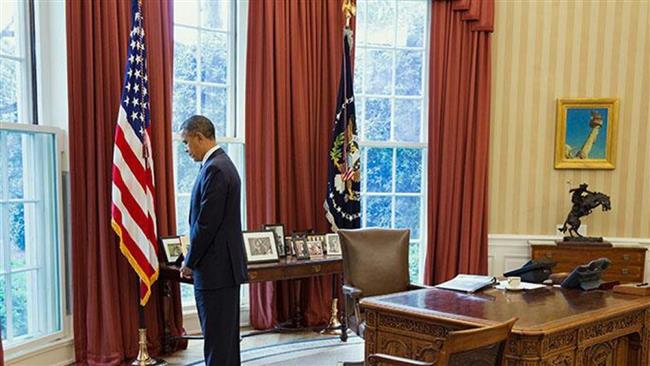 Obama will not watch Netanyahu speech even on television: Report

US President Barack Obama will not watch Israeli Prime Minister Benjamin Netanyahu’s controversial speech to a joint session of Congress even on television, a report says.

A senior White House adviser told CNN journalist Gloria Borger that Obama would be in a meeting during Netanyahu’s speech on Tuesday at 11:00 a.m., CNN anchor Jake Tapper reported on Monday night.

“I haven’t looked at the president’s schedule for tomorrow,” Earnest said on Monday. “I doubt that he will spend his whole time watching the speech.”

The Israeli premier, at the invitation of US House Speaker John Boehner, is scheduled to address Congress. He is expected to use the podium to warn about the “threat” of an emerging nuclear accord with Iran. The White House has denounced the speech as a “breach of protocol.”

Tensions have escalated between the United States and Israel over Netanyahu’s congressional address, which has been arranged without consultation with the White House.

On Monday, President Obama, Secretary of State John Kerry and Vice President Joe Biden boycotted the American Israel Public Affairs Committee (AIPAC) lobbying group, where Netanyahu said he has a “moral obligation” to warn against a nuclear deal with Iran.

The White House has said Obama will not meet with Netanyahu while the prime minister is visiting Washington.

Iran and the P5+1 countries – the US, Britain, France, China, Russia, and Germany- are making attempts to narrow their differences on the outstanding issues related to Tehran’s nuclear program ahead of a July 1 deadline.

Kerry arrived in Geneva, Switzerland, on Sunday night to hold a series of meetings, over the next three days, with his Iranian counterpart Mohammad Javad Zarif and foreign ministers of countries involved in the nuclear talks.