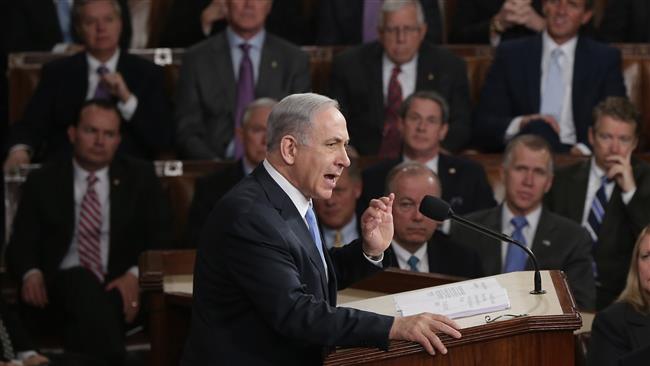 Netanyahu to US: Don’t negotiate ‘bad deal’ with Iran

Israeli Prime Minister Benjamin Netanyahu has called on the United States not to negotiate “a very bad deal” with Iran over its nuclear energy program.

Speaking at a joint session of the US Congress in Washington, DC, on Tuesday, Netanyahu said, “We’ve been told for over a year that no deal is better than a bad deal. Well this is a bad deal, a very bad deal. We’re better off without it.”

Netanyahu said that it is not true that “the only alternative to this deal is war.”

“The alternative to this deal is a much better deal. A better deal that doesn’t leave Iran with a vast nuclear infrastructure and such a short breakout point,” he added.

He said that the ongoing nuclear negotiations would provide Iran “with a short breakout time for a bomb.”

“According to the deal not a single [facility] would be demolished… because Iran’s [facilities] would be left largely intact,” he said.

“So this deal won’t change Iran for the better, it will only change the Middle East for the worst,” he noted.

Netanyahu’s controversial speech started on Tuesday at 11:00 a.m. (local time). He was invited by US House of Representatives Speaker John Boehner hours after President Barack Obama threatened to veto any sanctions legislation against Iran during his State of the Union address on January 20.

The Israeli premier called on the P5+1 group to make Iran’s missile program part of any possible agreement.

“And by the way, if Iran’s Intercontinental Ballistic Missile program is not part of the deal, and so far, Iran refuses to even put it on the negotiating table,” he said.

“Well, Iran could have the means to deliver that nuclear arsenal to the far-reach corners of the earth, including to every part of the United States,” he claimed.

The United States and Israel accuse Iran of pursuing military objectives in its nuclear energy program.

Washington and its allies have imposed illegal sanctions on Iran based on the unfounded accusation that Tehran is pursuing non-civilian objectives in its nuclear program.

Last week, Al Jazeera television network released a secret Mossad cable which revealed that Israel has been aware that Iran’s nuclear program is peaceful and does not include “the activity necessary to produce weapons.”

The Israeli spy agency’s top-secret cable, leaked on February 23, concluded that Iran was “not performing the activity necessary to produce weapons.”

A similar CIA report, leaked on February 20, disclosed that Washington tried to mislead the IAEA about Iran’s nuclear program through the provision of doctored evidence.