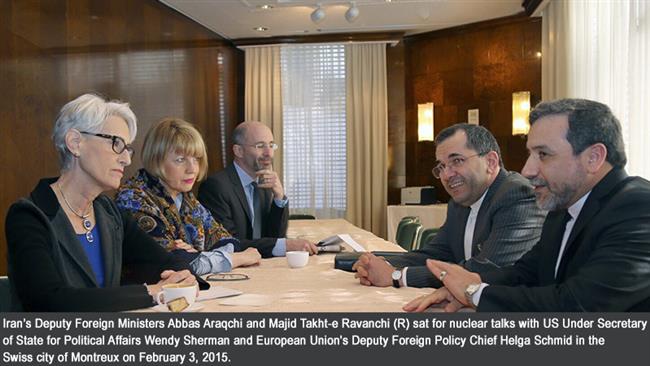 The Iranian deputy foreign ministers have kicked off talks with senior US officials on Iran’s nuclear energy program in the Swiss city of Montreux.

Reports also say the head of the Atomic Energy Organization of Iran (AEOI), Ali Akbar Salehi, and US Energy Secretary Ernest Moniz wrapped up technical talks on the Islamic Republic’s nuclear program earlier in the day.

In the morning talks, delegations from Iran and the US headed by Iranian Foreign Minister Mohammad Javad Zarif and US Secretary of State John Kerry discussed issue around Iran’s nuclear program during the second day of their latest round of talks.

Zarf (shown below) said after the talks in the morning that  “We are hoping to be able to make progress. There are a lot of difficult issues and we need to address them but there is a seriousness that we need to move forward. “

“We need the necessary political will to understand that the only way to move forward is through negotiation,” Zarif told Press TV correspondent in Montreux.

The new round of talks in Montreux comes as representatives from Iran and the United States held three rounds of intense negotiations in the Swiss city of Geneva on February 22-23 to bridge their differences ahead of a key July 1 deadline for reaching a comprehensive deal.

Iran and the P5+1 countries – Britain, France, China, Russia, and the United States plus Germany – are in talks to narrow their differences on outstanding issues related to Iran’s nuclear energy program. The two sides have missed two deadlines since an interim deal was signed in November 2013. They have set July 1 as the next deadline for the talks.