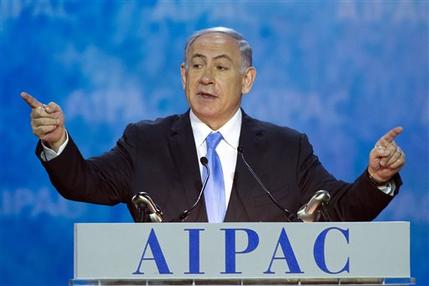 For Israeli leaders, blocking Iran deal a matter of legacy

WASHINGTON (AP) — En route to what he described as a “fateful mission,” Benjamin Netanyahu spent much of his 12-hour flight to Washington slouched in a business class seat laboring over a draft of his highly anticipated address to Congress. In the back of the plane, the rest of the delegation was watching “The Imitation Game,” a biopic of British cryptanalyst Alan Turing, who helped break the Germans’ Enigma code and aided the allies’ victory in World War II.

The symbolism was hard to ignore. Netanyahu considers himself to be a visionary who foresaw the Iranian nuclear threat long ago, and hopes that blocking it from attaining a bomb will be his crowning achievement in government.

With no invitation to the White House and the vice president and secretary of state out of the country, Netanyahu kicked off the visit before a friendly home crowd Monday – a pro-Israel U.S. lobby group – and tried to downplay the crisis with President Barack Obama as a family spat.

“America and Israel are more than friends. We’re like a family. We’re practically mishpucha,” he said to laughter, using the Yiddish expression for family. “Now, disagreements in the family are always uncomfortable, but we must always remember that we are family.”

Despite the expressions of affection, the family spat will be on full view on Tuesday when he addresses Congress. Not only will Republican House Speaker John Boehner – who invited him behind the president’s back – be sitting behind him, the senior Republican senator, Orrin Hatch, will be stationed where Vice President Joe Biden would normally sit.

Following Monday’s AIPAC speech, Netanyahu was expected to keep working on his speech till the very last minute trying to live up to the hype that has been created over the controversial address.

“You know, never has so much been written about a speech that hasn’t been given,” he told attendees of the American Israel Political Action Committee policy conference.

Boehner is planning a festive greeting for Netanyahu Tuesday and will present him a bust of Winston Churchill, the only other foreign leader to address Congress three times.

Netanyahu often cites Churchill as an inspiration and the world leader he most admires.

Netanyahu’s office says the Israeli leader will give Boehner a menorah and a copy of the story of Purim, a Jewish holiday being celebrated this week that commemorates the deliverance of the Jewish people in the ancient Persian Empire where a plot had been formed to destroy them. The gift is symbolic in that Iran has vowed to annihilate Israel.