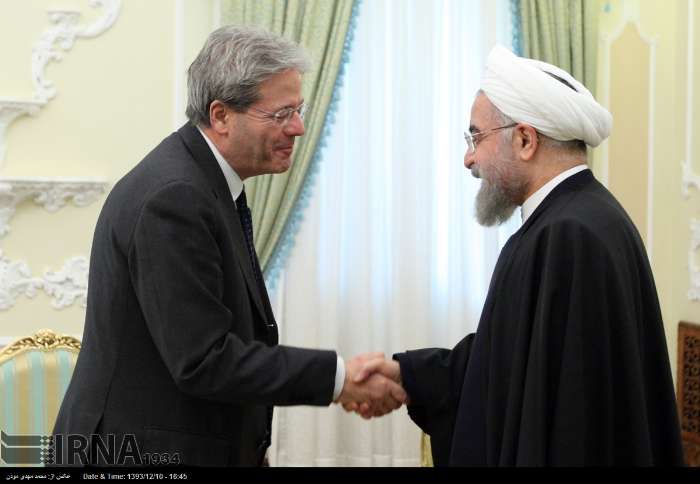 TEHRAN, Mar. 01 (MNA) – Iran’s Hassan Rouhani has said there is no reason whatever for sanctions to be still on place against Iran’s economy.

President Hassan Rouhani received Italian Foreign Minister Paolo Gentiloni on Sunday who is in Tehran to meet with Iranian officials. Rouhani said that frequent meetings between Iran and Italy would improve bilateral relations; “the visits by both countries officials to Tehran and Rome would benefit the region and the world as well,” said Rouhani, “both countries had long history of political and cultural relations; in political sphere, apart from business relations, we have developed improving relations in recent years,” he added.

Rouhani appreciated the positive role of Italy in nuclear negotiations; “haplessly, ill-conceived sanctions have damaged the European Union,” said he, calling on Italian companies to grasp the opportunity to cooperate with Iran.

President Rouhani believed that the world clearly saw Iran’s good will in nuclear negotiations, and that Iran had been always committed to its obligations; “all knew that Iran is quite serious in negotiations; the nuclear issue has no other solutions than negotiation; the negotiations sought fundamentally to create mutual confidence, and we believe that sanctions should be eliminated once altogether,” he emphasized.

On Iran’s contributions to fighting terrorism, Rouahni said that Iran had viewed terrorism a threat to all; “the Islamic Republic of Iran had warned several times the west that terrorism would spread beyond the place where it had been supported by hegemonic powers, in Iraq, Libya, and Syria,” he added.