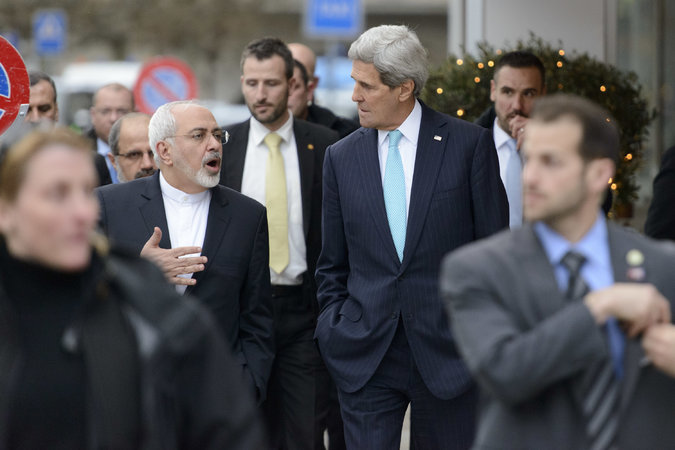 Kerry is pushing for agreement in Iran nuclear talks

The Iranian foreign minister, Mohammad Javad Zarif, was criticized for the stroll he took with Secretary of State John Kerry in Geneva on Jan. 14. Credit Laurent Gillieron/European Pressphoto Agency

WASHINGTON — They have spent long hours alone together. They exchange private emails. Their walk along the Rhone River in Geneva in January so unnerved hard-line lawmakers in Tehran that they signed a petition fretting about the duo’s unseemly “intimacy.”

On Sunday, Secretary of State John Kerry flew to Switzerland to meet again with Mohammad Javad Zarif, the Iranian foreign minister who earned a Ph.D in international law and policy from the University of Denver, to try to negotiate the very accord that Prime Minister Benjamin Netanyahu of Israel arrived in Washington that same day to denounce.

As the deadline approaches for what could be one of the most important and divisive international agreements in decades, Mr. Kerry has become a driving force behind the complicated, seven-nation talks to limit Iran’snuclear program. But with so much at stake, Mr. Kerry’s relentless negotiating style and determination to engage with Mr. Zarif have become part of the debate.

To proponents of the emerging accord, Mr. Kerry’s determination has made all the difference.

“He has made a huge investment of his time and energy in the talks, and his personal, hands-on involvement in recent months has been crucial to building momentum toward a deal,” said Robert Einhorn, a senior fellow at the Brookings Institution who served on the American negotiating team on the Iran talks from 2009 to 2013.

To critics, Mr. Kerry’s eagerness is an open invitation for the Iranians to press for concessions as the talks enter the final stage.

Ray Takeyh, a senior fellow at the Council on Foreign Relations and a former State Department expert on Iran, said that given Mr. Kerry’s “inordinate attention to this issue, there is an impression that he wants this agreement more so than the Iranians.”

When Mr. Kerry recently warned that the United States was prepared to walk away from the talks if the Iranians refused to compromise, “that was not a claim that was taken with much seriousness in Tehran,” Mr. Takeyh said.

Mr. Kerry’s meeting with the Iranians on Monday in the Swiss lakeside town of Montreux will be his eighth negotiating session with them this year. It follows meetings in Geneva, Munich, Paris and Davos, Switzerland, which also had one-on-one sessions in which Mr. Kerry and Mr. Zarif, who call each other John and Javad, left their negotiating teams behind to convene alone.

An agreement on Iran’s nuclear program would be a momentous event in American-Iranian relations, and one that White House officials insist is the best hope for constraining Tehran’s nuclear ambitions and easing decades of animosity between Iran and the United States. But critics fear a deal will merely defer the day when Iran becomes a nuclear weapons state, while prompting Arab nations to consider developing their own nuclear deterrent.

An accord could also be a major accomplishment for Mr. Kerry, 71, who haslogged more than 309 travel days in the past two years, but whose major achievement to date is an agreement that required President Bashar al-Assad of Syria to give up his chemical arms — and left him ensconced in Damascus while the casualty toll from the conflict has continued to soar. Mr. Kerry’s intensive pursuit of a Middle East peace agreement ended in bitter recriminations between Israeli and Palestinian leaders, and he has little to show for his push to end the civil war in Syria.

In Ukraine, it is the Germans and French who have the lead: No American officials were present when a shaky cease-fire was reached in talks with President Vladimir V. Putin of Russia last month, and which Russia-backed separatists ignored by taking the town of Debaltseve.

Mr. Kerry’s relationship with Mr. Zarif is not unique. Mr. Kerry has invested heavily in his relationships with other foreign figures, such as Mr. Netanyahu and Sergey V. Lavrov, the Russian foreign minister, even when the payoff has not always been obvious.

But Mr. Kerry clearly sees Mr. Zarif as a promising interlocutor at a time when conditions for a deal are better than they have been in years. Plummeting oil prices, economic sanctions and the Obama administration’s willingness to allow Iran to retain a limited capability to enrich uranium have provided Tehran with an incentive to negotiate.

Mr. Kerry’s diplomatic efforts with Mr. Zarif began at the United Nations in September 2013, when an introductory meeting scheduled for five minutes lasted for half an hour and ended with the diplomats exchanging email addresses and phone numbers.

The relationship, however, has not always been harmonious. There were angry voices in a meeting in Muscat, Oman, last November, when the American side became frustrated by Mr. Zarif’s reluctance — or inability, given his tight negotiating instructions — to make important concessions. When the two sides were unable to surmount their differences later that month in Vienna, Mr. Kerry proclaimed that they had been brainstorming about new ideas and would seek a framework agreement by the end of March.

In recent months, the pace, intensity and stakes of the talks have increased. After Mr. Zarif was criticized by the Iranian lawmakers for his stroll with Mr. Kerry in Geneva, he appeared to be taking no chances when the two sides reconvened in Munich in February and photographers were not permitted to record the traditional handshake and greetings at the start of the session.

In an apparent effort to demonstrate his toughness to his Iranian critics, Mr. Zarif also told Iran’s state-controlled media that he had been instructed by Iran’s supreme leader, Ayatollah Ali Khamenei, to stop shouting at Mr. Kerry.

At the last round of talks, however, the two sides appeared to get down to business. As that negotiating session approached, the Iranians informed the United States that Mr. Zarif would be accompanied in Geneva by Ali Akbar Salehi, the director of Iran’s Atomic Energy Organization, who also served as foreign minister under Iran’s former president, Mahmoud Ahmadinejad. That prompted the United States to include Ernest J. Moniz, the secretary of energy, in the talks.

Mr. Salehi and Mr. Moniz are also expected to be at the Montreux negotiations with the two foreign ministers.

In the meantime, Mr. Kerry’s laserlike focus on getting an accord has unnerved Israel and prompted concerns in Saudi Arabia and other Arab foes of Tehran, anxieties Mr. Kerry is trying to quell even before an agreement has been forged.

Mr. Kerry talked to Mr. Netanyahu by phone on Saturday, and discussed the Iran negotiations, the prime minister’s visit to Washington and the United States’ concern about the financial plight of the Palestinian Authority, even after criticizing him in public. (Mr. Kerry recently told Congress that the Israeli prime minister’s support for the George W. Bush administration’s effort to topple Saddam Hussein showed his judgment could not always been trusted. Mr. Kerry did not mention that he himself voted for a 2002 Senate resolution authorizing military action against Iraq if diplomatic efforts to eliminate its suspected weapons of mass destruction failed.)

Mr. Kerry has also made plans to try to ease Arab anxieties about the potential accord with Iran. After leaving Montreux, Mr. Kerry plans to head to Riyadh to meet on Thursday with the new Saudi king, Salman. His next step will be London, where he will meet with foreign ministers from Arab nations in the Persian Gulf.

A European diplomat whose country is participating in the negotiations with Iran questioned last week whether Mr. Kerry was too involved. “You want to bring in the secretary of state at the end, to resolve the last differences, as a closer,” said the official who spoke on the condition of anonymity because he was not authorized to speak publicly about the talks. “He should not be involved in the day-to-day technical negotiations.”

The Obama administration has sent Mr. Moniz and a team of experts to work on the technical issues with their Iranian counterparts in Montreux. But the next few weeks are expected to see a series of marathon meetings between the two foreign ministers, and with a deadline fast approaching, nobody is expecting Mr. Kerry to hold back now.