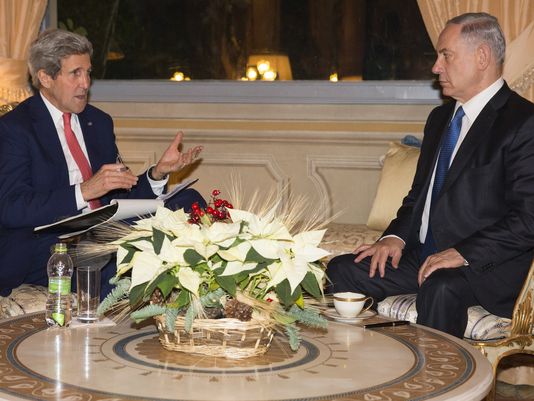 Kerry: Iran is not ‘political football’ with Israel

Secretary of State John Kerry says nuclear talks with Iran shouldn’t become “a political football” between the United States and Israel because both nations have the same goal.

“We want to recognize the main goal here is to prevent Iran from getting a nuclear weapon,” Kerry said in an interview on ABC’s This Week. “And on that, Israel and the United States agree.”

Kerry spoke two days before Israeli Prime Minister Benjamin Netanyahu is expected to criticize the prospects of an Iran deal during a speech to a joint session of Congress.

While Kerry and President Obama say an agreement among the U.S., allies, and Iran will prevent the latter from developing the means to make a nuclear weapon, Netanyahu says Iran cannot be trusted and will still try to become nuclear-armed.

“We are strongly opposed to the agreement being formulated between the world powers and Iran that could endanger Israel’s very existence,” the Israeli leader tweeted as he departed for Washington, D.C.

Netanyahu’s speech is the latest in a series of fights between him and President Obama and his aides. Each side accuses the other of abusing the historic U.S.-Israeli relationship.

Kerry, who spoke by phone with Netanyahu on Saturday, sought to lower the temperature during his ABC interview, citing ongoing U.S.-Israeli cooperation in an array of areas. The secretary of state said that “we have a closer relationship with Israel right now in terms of security than at any time in history.”

President Obama will not meet with Netanyahu while he is in Washington, D.C. Vice President Biden, who is also president of the Senate, will not attend the Israeli leader’s speech to Congress.

In ongoing talks, the U.S. and allies are offering to reduce sanctions on Iran if its government forgoes the means to make nuclear weapons.

An existing interim agreement with Iran has been good for Israel, and so would a long-term deal, Kerry said.

“Israel is safer today,” he said, “and that is the standard that we will apply to any agreement going forward. It is to guarantee that we will know that Iran cannot develop a nuclear weapon under the procedure that we’re putting in place.”

Kerry added: “It is better to do this by diplomacy than to have to do a strategy militarily, which you would have to repeat over and over and over again and which I think everybody believes ought to be after you have exhausted all the diplomatic remedies.”