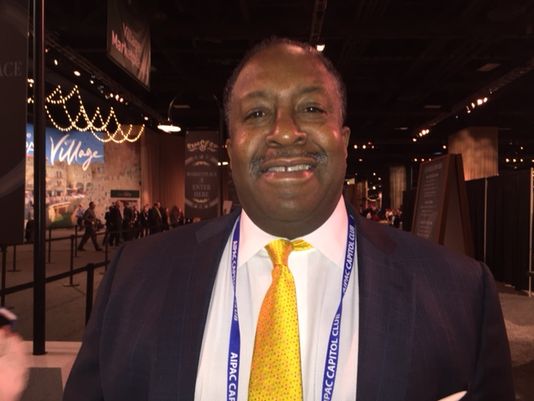 Forget about the speech, focus on Iran, AIPAC says

WASHINGTON – Israeli Prime Minister Benjamin Netanyahu’s speech before Congress on Tuesday has spawned a bitter debate on two continents, but there was no apparent dissent at the annual conference of the American Israel Public Affairs Committee Sunday.

Whether House Speaker John Boehner should have invited Netanyahu to come right before his tough re-election— with no input from the Obama administration — is an unwelcome distraction from weightier issues, several attendees said.

The mission of the annual conference was clearly to unite the 16,000 attendees — up 2,000 from last year — to rally around a tougher nuclear deal with Iran. Netanyahu will speak here Monday before his Tuesday speech in the Capitol, and organizers are sending the crowd to amplify his message to Congress during lobbying visits Tuesday.

Obama asked Congress during his January State of the Union address not to pass new sanctions on Iran while negotiations over the nation’s nuclear program are ongoing, but Netanyahu has​ made it clear he believes the talks are a sham and Iran will never give up its nuclear ambitions.

New Jersey physicians Benjamin and Arden Fusman came to the AIPAC conference for the first time to show support because they are concerned there is so much emphasis on the infighting that “the world is missing the point” about Israel. (Photo: Jayne O’Donnell)

Sen. Lindsey Graham told the conferees they were the most important voice in Washington this week. “You’re going to make more difference than any speech any politician could ever deliver,” Graham told the crowd.

Grace, who is African American and was featured in a video highlighting Israel’s diversity of support, says he feels connected to the Israeli cause “more on the humanistic side.” The trauma children face in Israel, where they have to scatter when there are warnings about incoming rockets, is similar to that faced by kids in the violence-strewn South Side of Chicago where he grew up, Grace said.

The conference was an intricately-staged production designed to dazzle. The family of a disabled boy showed how a device made by the Israeli Defense Forces to carry injured soldiers helped them take the boy hiking. Members of IDF’s “outstanding musicians program” performed. Mosab Hassan Yousef, a former member of the Palestinian militant group Hamas who became an Israeli spy, spoke about his work thwarting suicide attacks and assassinations targeting Jews.

Siblings, left to right, Gilad, Ari and Sigal Palley loved how the AIPAC conference was varied yet managed to communicate Israel’s “important values,” as Ari put it. (Photo: Jayne O’Donnell)

Johns Hopkins University student Ari Palley, who attended with his brother and sister, agreed the conference did “a good job with The Green Prince,” a documentary film about Yousef’s life.

“He showed it’s not just about Israel, it’s a battle of values,” said Palley.

The conference is a foreign affairs pep rally, academic seminar and product showcase rolled into one. Dozens of sessions ranged from the history of the Israeli-Palestinian conflict to Israel’s craft beer industry.

Esther Korn has come to the conference five times and has taken each of her three children. This year, it was daughter Talia’s turn. She found it both exciting and disheartening that the Washington disputes were getting so much attention.

“My feeling is leave all the politics behind,” says Korn. “Let’s talk about the issue; it’s about Iran getting nuclear weapons.”