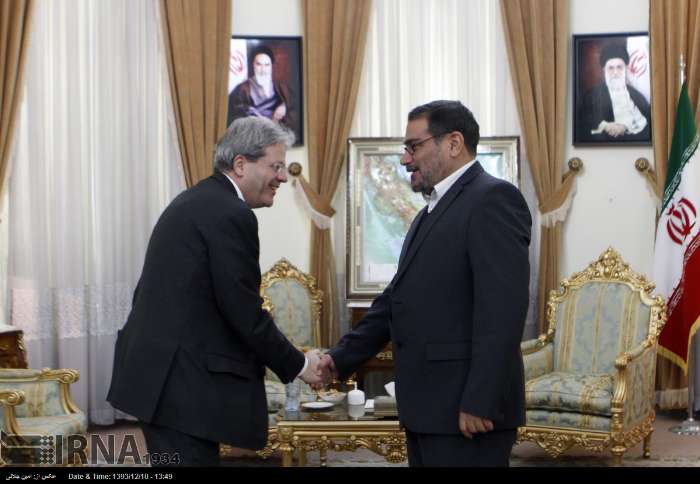 “Tehran has repeatedly warned of the grave consequences of arming the terrorist groups under the pretext of campaign against the legal government of Syria,” Shamkhani said in a meeting with Italian Foreign Minister Paolo Gentiloni in Tehran on Sunday, warning that “adoption of wrong policies by certain western states and their regional allies will lead to terrorist threats to the international community”.

He underlined that instability and insecurity will further increase if the aforementioned states don’t revise their wrong approach to terrorism.

“The experience of Libya and the emergence of the ISIL in the country showed that foreign military intervention and instrumental use of armed groups is not the solution, and will rather intensify damages, human losses and destruction of economic infrastructures and exacerbates destructive crises,” Shamkhani said.

Gentiloni, for his part, described terrorism as the most vital threat posed to the region and the world, and said, “Iran’s assistance to the settlement of the regional issues, specially in fighting the ISIL extremism and other regional issues, is highly effective and decisive.”

Iranian officials have on different occasions warned of the consequences of certain western and Arab states’ support for the terrorist groups in the region.

In relevant remarks in 2014, Iranian Parliament Speaker Ali Larijani lashed out at the US and its western and regional allies for creating, arming and supporting extremist groups in the region, and called for regional nations’ vigilance against such plots.

Speaking in a meeting with Nigerian Parliament’s Head of the Agriculture Commission Mohammad Taher Mongono at the time, the top Iranian parliamentarian voiced concern over the spread of extremism in the region, and called for Muslim nations’ more unity to thwart enemies’ divisive plots.

Also last year, Larijani in a meeting with Chairman of the Kenyan parliament’s National Security and Foreign Relations Commission Mohammad Yusuf Haji blasted the world powers for their lack of firmness in fighting terrorist groups.

“The world powers lack a serious and real will for fighting the ominous phenomenon of terrorism and use it as an instrument to achieve their goals,” Larijani said during the meeting in Tehran.