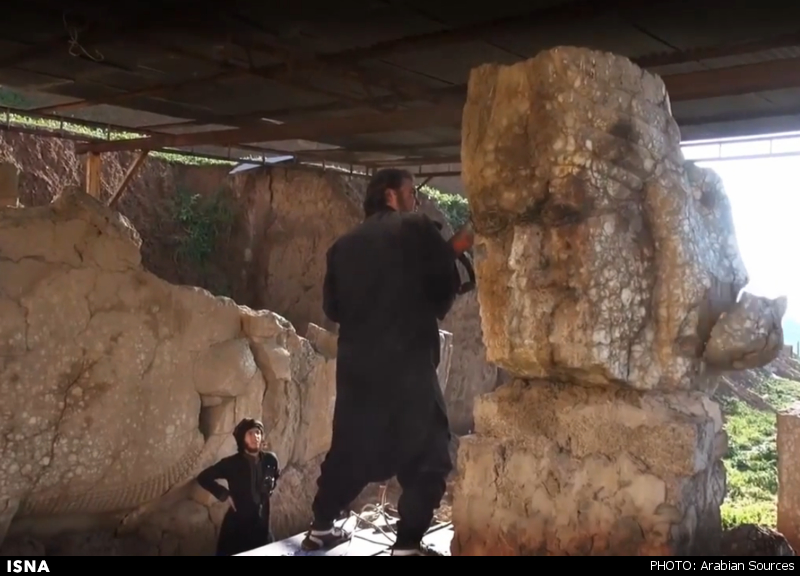 The image made from video posted on a social media account affiliated with the Islamic State group on Thursday, Feb. 26, 2015.

The ISIL Takfiri group has released a new video showing its militants destroying the ancient artifacts at a museum in the northern Iraqi city of Mosul.

215 Iranian lawmakers blasted the barbarous act. Zargham Sadeghi, a member of presidium member of Iranian Parliament said, “The parliamentarians issued a statement condemning the inhuman acts of terrorist ISIL group which killed and took hostage Assyrian people and destroyed ancient artifacts in a museum in Mosul.”

The statement further added that destructing Iraqi historic and ancient works shows the anti-civilized nature of the terrorist group, and large deal of the precious artifacts were plundered by the group or smuggled to western countries.

The video released on Thursday showed terrorists using sledgehammers and drills to smash ancient statues in Mosul where the militants have been operating over the past ten months.

The vandalism purportedly took place at the Nineveh Museum, which puts on exhibit Assyrian artifacts dating back to the 9th century BC.

The video shows the Takfiri terrorists barbarically pounding 3,000-year-old sculptures with hammers. Tens of militants are seen in the footage using pickaxes, ladders, drills and hammers to destroy every single piece of artifact in the museum.

A precious Assyrian protective deity, dating back to 7th century BC is also shattered by the militants in the video.