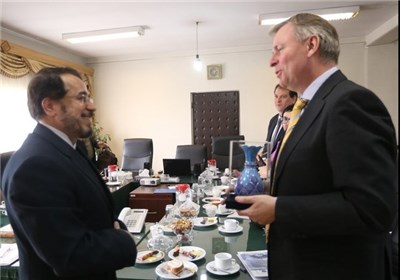 head of the Center for Interreligious Dialog and Civilization from the Islamic Culture and Relations Organization (ICRO), Ali Mohammad Helmi meets Austria’s Ambassador to Iran Friedrich Stift in Tehran on February 28, 2015.

TEHRAN (Tasnim) – Iranian and Austrian officials in a meeting in Tehran explored avenues for the enhancement of academic cooperation on religious issues, with the European side expressing preparedness to host a new round of religious talks this year.

Austria’s Ambassador to Iran Friedrich Stift and Ali Mohammad Helmi, head of the Center for Interreligious Dialog and Civilization from the Islamic Culture and Relations Organization (ICRO) held a meeting in Tehran on Saturday.

Expressing the hope for the continuation of interfaith dialog between Iran and Austria, Stift hinted at his country’s preparedness to host the sixth round of religious talks between Tehran and Vienna.

He said Austria would welcome an Iranian delegation for the talks, due to be held in October 2015.

Helmi, for his part, said Iran is ready to brief Austrians on the activities of the Iranian academies and centers that are engaged in religious studies.

He also proposed the idea of exchange of professors and students between Iran and Austria for better cooperation on religious issues.

Titled “Unified Islamic Ummah: Challenges and Strategies”, the international conference brought together some 1,200 Islamic scholars and intellectuals from around the globe.