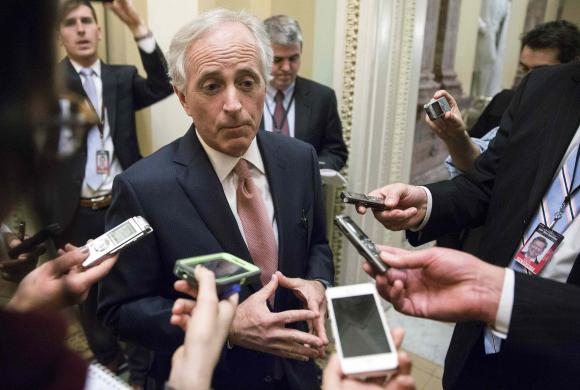 U.S. bill would require congressional review of any Iran deal

(Reuters) – U.S. senators introduced legislation late on Friday requiring congressional review of any deal with Iran over its nuclear program.

The Iran Nuclear Agreement Review Act would require President Barack Obama to submit to Congress the text of any agreement within five days of concluding a final deal with Iran. The bill would also prohibit Obama from suspending or waiving sanctions on Iran passed by Congress for 60 days after a deal.

“It is important that we preserve the integrity of the congressional sanctions,” said Senate Foreign Relations Committee Chairman Bob Corker, a Republican who sponsored the measure with Senator Bob Menendez, the top Democrat on the panel, and others.

The bill creates a “responsible review process that will allow Congress the opportunity to approve or disapprove the agreement before the administration could attempt to remove these sanctions,” Corker said.

The foreign relations panel passed a new sanctions bill on Iran this month. But lawmakers are giving the talks between Iran and six countries, including the United States, until a March 24 deadline before that bill would move to the Senate floor.

It was not immediately known when the bill introduced on Friday would come to a vote in the committee.

Talks on an agreement to curb Iran’s nuclear program have advanced substantially, but tough issues remain and a deal is not expected in the coming week, a U.S. official said on Friday.