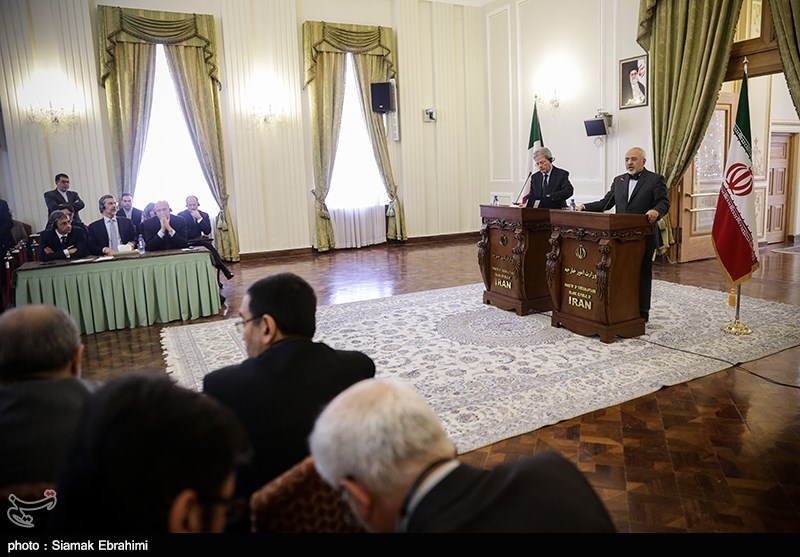 TEHRAN (FNA)- Iranian Foreign Minister Mohammad Javad Zarif underlined that Tehran and the six world powers (the US, Russia, China, Britain and France plus Germany) have made progress and are at a sensitive stage in their nuclear talks, but the issue of sanctions has become a stumbling block.

“The nuclear negotiations have arrived at a sensitive stage. We had highly good, detailed and precise talks last week,” Zarif said in a joint press conference with his Italian counterpart Paolo Gentiloni in Tehran on Saturday.

Noting that considerable progress has been made during the last round of talks between the two sides, he said, “But differences in views still remain in many other fields both on nuclear- and sanctions-related issues.”

“We have stated repeatedly that sanctions are no good to the attainment of any goal and the US and the western states should come to this conclusion that the sanctions are not a capital, but they are an obstacle to reaching an understanding; whenever this reality is accepted, we will come close to the attainment of a nuclear agreement,” Zarif said.

He expressed the hope that Iran and the Group 5+1 could make some progress, specially in area of sanctions, in their upcoming meeting in Switzerland.

Senior officials from Iran and the six world powers will hold more talks in Montreux, Switzerland, on March 5, the European Union (EU) said on Saturday.

“The EU is making every effort to facilitate the negotiations. We cannot miss the opportunity of a good agreement,” EU foreign policy chief Federica Mogherini said in a statement.

The talks between political directors will be preceded by a series of bilateral meetings between Iran and some of the members of the G5+1 starting on Monday, March 2.

The Iranian and American teams of negotiators started several days of talks in Geneva earlier this month on February 20. Then after two days of negotiations, Iranian Foreign Minister Mohammad Javad Zarif, Head of the Atomic Energy Agency of Iran (AEOI) Ali Akbar Salehi and President Rouhani’s brother and senior aide Hossein Fereidoun as well as US Secretary of State John Kerry and Secretary of Energy Ernest Moniz joined their deputies in the talks.

After two days of intensive negotiations with his US counterpart, Zarif said that Tehran and Washington had “serious, useful and constructive” talks in the last few days, but there was still a long way ahead before a final nuclear deal could be struck.

Speaking to reporters on Monday and after two days of talks with his US counterpart, Zarif said, “We have made progress on some topics to some extent, but there is still a long way to pave before reaching a final deal.”

He noted that Iran and the six major world powers had “serious, useful and constructive” talks, specially with the US whose secretaries of state and energy also took part in the negotiations.

The Iranian foreign minister reiterated that there would be no agreement unless both sides agreed on all issues.