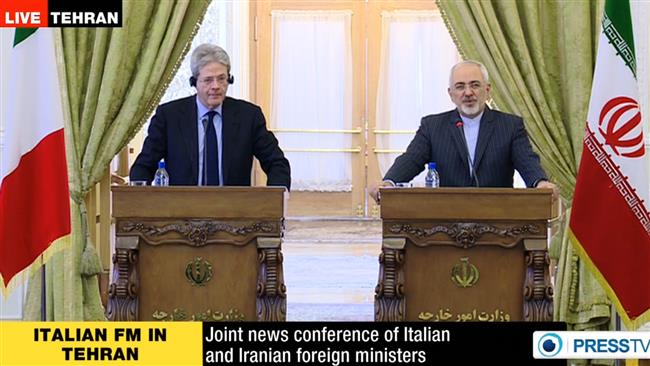 Addressing a joint press conference with his Italian counterpart Paolo Gentiloni in Tehran on Saturday, Zarif added that negotiators of Iran and the United States held “accurate” and fruitful talks in the Swiss city of Geneva on February 22 and 23.

“We have announced many times that as long as general issues are not agreed upon, there will not be any agreement,” the Iranian minister said.

He emphasized that there would be no deal unless the sides reach an agreement on all issues.

The top Iranian nuclear negotiator said the sides certainly made “some serious progress” in Geneva, expressing hope the negotiating sides would also make progress next week on other issues, especially the lifting of sanctions.

“In that case, we will draw it up in the form of a comprehensive and accurate deal,” said Iran’s diplomacy chief.

Nuclear talks between representatives from Iran and the United States were held in Geneva, Switzerland, on February 22 and 23 and the two sides held three rounds of negotiations in two days in an attempt to narrow their differences ahead of a key July 1 deadline for reaching a comprehensive deal.

Both top Iranian and US diplomats said some progress was made toward a final deal.

Political directors from Iran and the P5+1 group’s foreign ministries will hold a fresh round of talks about Tehran’s nuclear program in Montreux, Switzerland, on March 5, EU spokeswoman, Catherine Ray, said on Friday.

A series of bilateral meetings will also be held prior to the planned high-level talks between negotiators from Iran and the five permanent members of the UN Security Council plus Germany, she added.

Iran and the P5+1 countries  — Britain, France, China, Russia, and the United States plus Germany – are making attempts to narrow their differences on the outstanding issues related to Tehran’s nuclear program.