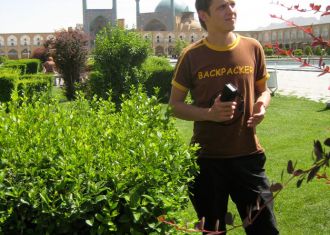 Josh Cahill is a 28-year-old German adventurer. Iran is one of 65 countries he has visited up to now. He hitchhiked to Iran, first time in 2009 and then he travelled the country in 2011 for a short visit.

However, he believes that “there is still more to discover”. Josh shared his experiences on his website gotravelyourway.com.
“I’m not on a mission to visit every country in the world but I wouldn’t mind if I got to see at least 100 before I stop hitting the road,” he added.
He was only 22 when he travelled to Iran for the first time. “Everything was really interesting, and many things were new to me [in Iran],” he said.
Pack the backpack to experience real face of Iran
“Iran is a place full of history unlike any other place in the world. There is something unique about the former Persian Empire, and all the Iranian people I’ve met in Germany were incredibly nice,” he told in an interview to the Tehran Times.
“I had heard so much about Iranian hospitality and that the cities of Tehran, Tabriz, Yazd and especially Isfahan were incredible places to explore.
“I think all those things definitely encouraged me to travel to Iran. It sounded like a great adventure to me, so I packed my backpack and off I went. I wanted to experience the real face of Iran,” he said.
Iranian hospitality is outstanding!
He called Iranians “amongst the most amazing people” he has encountered while travelling.
He said that Iranians “wanted to share the best of themselves and their country with the rest of the world.”
“Their hospitality is outstanding and what they did for me while I was there has always left me speechless.
“I’ve published a great story called ‘The day I got lost in Iran’ on my blog, which is really popular with my readers and has also been published on many other websites around the world. It pretty much describes how amazing the Iranians are,” he added.
“You certainly get a lot of attention since many Iranians don’t encounter a lot of tourists. They seem to be super curious and really keen to help with anything, and even have you over for dinner,” he said.
“Getting to know people and getting to experience a completely different culture was something amazing and a great learning experience,” he said.
“I really enjoyed it [the Iranian cuisine]. I tried a few dishes but unfortunately I can’t remember the names of most of them. I just know I would eat them again for sure!,” he explained.
Isfahan, Yazd, Tehran: go-to destinations
He named Isfahan and “the vibrant city” of Tehran, Yazd as the places he loved the most in Iran.
“Isfahan is definitely a must-see. Its beautiful city center is a magical place and I could have just sat there and watched the world pass by all day long,” he described.
“I’m a huge fan of architecture and Iran is full of great buildings. Isfahan is probably a great example for a historical site.
“The Naqsh-e Jahan square is probably one of the most amazing vestiges of Persian culture. It is an incredible place which is a UNESCO World Heritage site,” he added.
He named Tehran’s Milad Tower (Tehran TV Tower) and Azadi Tower as two amazing monuments in the capital.
“Tehran was also a great place, a busy and very modern capital. Check out the former American Embassy, sometimes if you are lucky they will let you go inside.
“Try and visit the Tehran Grand Bazaar, the Golestan Palace, and the Azadi Tower or go for a little hike up Mount Tochal from where you can enjoy a great view over Tehran,” he added.
Yazd is a nice and interesting place with some really nice architectural highlights.
“Yazd was a place I felt that was kept in a very traditional way. Iran has so much to offer and I really like when ‘old’ meets ‘new’,” he added.
A trip advice for those who want to travel Iran
He said: “Try to spend as much time as you can with locals, go and engage with them and see what they are all about.
“Absolutely, the Iran that is portrayed in Western media has nothing to do with what you are going to experience in the country itself, it might not even exist.
“There is nothing more beautiful than to understand their vast culture and to spend time with Iranian people,” he added.
“Iran is a very modern country, with very liberal people.
“I liked to have political debates and even the Iranians I met never had any extremely negative opinion about America and Europe, which really made me think about Western media and their ways to create a situation that wasn’t completely real or accurate,” he said.
He suggested not being afraid of “what you hear from the media because it is nothing like it”.
“Iran is a very peaceful country and I never had any safety issues. Make sure you sort out your visa beforehand.
“It is very easy to do it online and pick it up somewhere along the way if you are not flying straight there.
“Learn a little bit about the customs of the country and Islam in general to understand what the “no go’s” are,” he concluded.
By Tehran Times
German adventurer Josh Cahill, Iran tourist attractions, Iran's tourism industry, Iranians hospitality, Quoted, Tourism February 28, 2015
A look at Iranian newspaper front pages on Feb. 28
Iran’s oceangoing ship launch adjourned until summer