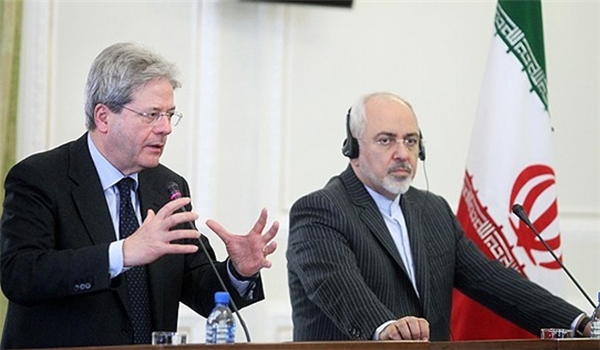 “I believe that we have created an active integrated economic context between the two countries,” Gentiloni said in a joint press conference with his Iranian counterpart Mohammad Javad Zarif in Tehran on Saturday.

Noting that the Italian environment minister is due to visit Iran soon, he said Italy will also host the Islamic Republic of Iran’s cultural officials in the near future.

Gentiloni referred to the extensive and constructive cooperation between the two countries in settling the regional problems, and said, “We have common interests in fighting extremism and the ISIL and finding solutions to other crises of the Middle-East region.”

Elsewhere, he also expressed the hope that the nuclear talks between Tehran and the world powers would produce results, and said the nuclear agreement will further provide the ground for the development of relations between Iran and Italy and will settle the problems.

Gentiloni, heading a high-ranking delegation, arrived in Tehran on Saturday morning at the invitation of Zarif to confer on the latest regional and international developments with senior Iranian officials.

During their meeting in the Iranian capital earlier today, Zarif and Gentiloni explored avenues for bolstering and reinvigorating bilateral ties.

Gentiloni is scheduled to have meeting with other senior Iranian officials today.

In October, Iranian President Hassan Rouhani in a meeting with Italian Ambassador to Tehran Mauro Conchatori underscored that there were abundant potentials for the further expansion of relations between Iran and Italy.

“Italy stands in the position of Iran’s biggest trade partner in Europe and today we should also be able to remove the problems facing the expansion of our relations and enhance the level of these ties to the status that they deserve,” Rouhani said during the meeting in Tehran.

Noting that Iran and Italy had always played the role of a bridge in the relations between the East and the West, he said that the two nations enjoyed noteworthy potentials and capacities for the further development of their bilateral relations in scientific, cultural, economic, political and international fields.

“Today many international and European companies are negotiating over economic and trade cooperation contracts with Iran, and Italy can become active in this field and use the existing opportunity given its extensive economic and industrial relations with Iran in the past,” Rouhani said.